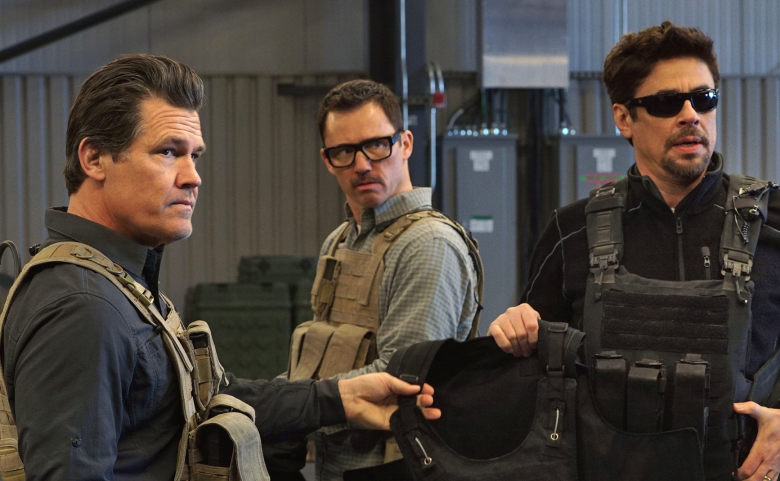 Sicario is not a film you would’ve expected to gain a sequel. Sure there is mileage in its tale of murky border policies between Mexico and the US, and the lengths to which both sides will go to reach their goal. Yet Denis Villeneuve, possibly one of the greatest filmmakers working today, elevated the first film into an almost mythological freefall into the heart of darkness. His camera, held by the wondrous hands of Roger Deakins, gliding across the sky as if God himself was looking down. Gods and Monsters would normally be at play, but here laid nothing but monsters. No one was truly the good guy, even Emily Blunt as our eyes and ears into this world could never be a hero, simply hold out her moral compass as best as she could. So a sequel seemed like only a mildly average prospect, especially when Blunt, Deakins and Villeneuve would all not be returning. Fortunately writer Taylor Sheridan opted to continue with this journey into greyness.

A gifted writer with a knack for sketching out troubled distant professionals navigating the seedy underbelly of America’s law enforcement. Think Blunt in Sicario or Elizabeth Olsen in Wind River. This time he focuses on two key players from the first film. Benicio Del Toro and Josh (starring in everything this summer) Brolin ground the action this time, with the story honing in on Mexican cartel boss Reyes smuggling countless people across the border. It just so happens that some of these people aren’t very nice, as showcased in Soldado’s brutal opening sequence. If you thought Sheridan couldn’t make things more darker than the first film, with its maimed bodies behind the walls, then think again. A terrorist bombing is framed with unflinching matter of factness, that could well put some people off continuing this journey. This incident gives the Government, here represented by Matthew Modine’s sneaky Secretary of Defense, carte blanche to attack their enemies. This is where Brolin’s Matt comes in. A man called in when dirtiness is called for (a fact spelled out very clearly in one of the films many on the nose dialogue exchanges), and Brolin excels at playing a man with singular driven purpose, not unlike a certain Marvel villain he played earlier this year. But one who come the end is capable of some humanity.

The second half of this double act is Benicio Del Toro’s Alejandro, lured back by Matt to cause chaos for the Cartels by inciting a war. Captured in a moment of shocking brutality albeit one that leaves you a little confused, did he really need to fire that many bullets?! You’ll understand once you see the moment in question. In order to really kick things off though they choose to kidnap Reyes’s daughter Isabel, played by Isabela Moner (Transformers 5). Events escalate, as to be expected, with the girl thrown about until a mid-film twist turns Del Toro protector and Brolin hunter. In some respects Moner is used similar to Blunt in the first, a naive eyewitness, forced to make decisions that challenge her very soul. Alas Moner is only young and not quite the powerhouse that Blunt is, she is solid and sells her vulnerabilities well but never quite compels like Blunt did.

Alongside this main plot Sheridan brings in a young man played by Elijah Rodriguez with seemingly little bearing on the plot at hand. Indoctrinated into the Cartels business of smuggling, his quiet demeanour masking a drive to prove himself worthy, before he smashes into the central plot with almost inevitable tragic fate. It is a device Sheridan effectively used in Sicario, with Maximiliano Hernandez’s corrupt cop, to give weight to the idea of divine inevitability. These are men with no grander schemes than to just survive and provide for their families, but at the cost of their moral centres. In the world of Sicario no soul leaves intact.

Sicario 2 is for the most part a successful follow up because, like all good sequels, it understands The Dark Knight adage of escalation. Notably in its first half wherein the US forces take extreme measures to counteract this growing threat. Sheridan paying particular care to throw in political shade with its talk of Afghanistan and foreign policy. Usually via the voice of Catherine Keener’s Cynthia, there to watch over Matt’s ever worsening handle of things. Keener has always been a formidable force with characters of power and she once again delivers the fire here. Sheridan drops the wider context a bit though as things escalate, choosing instead to focus on character, notably in Alejandro.

In some respects this works well. Del Toro evolves his broken but deadly role of silence in the first film for a man who is slowly rediscovering his humanity. Although played well and smartly built, it does sort of jar against the emotional distance and brooding sombreness of both the first film and the first half of this one. Despite its believability and heart there is a sense of generic that leaks in. A lone killer but with a heart of gold is a cliche used since the dawn of time. A turn which sort of feels disappointing after the unique essence Sicario carried. Events get even more “Hollywood” in a final act lurch into bold superheroics, a moment you sense was more built to suggest a third instalment than through any real plot logic. It jars against the brutal moral murkiness and realism Sheridan seemed to be striding for before.

Soldado still has a lot to give though, with debut director Stefano Sollima more than proving himself worthy. Despite the lack of Deakins, this maintains a stark beauty beyond the border, and action scenes surpass even the first in their immediacy and force. One mid-film set piece is up there with the first films Juarez shootout in building unsustainable tension before the necessary explosions. The simmering foreboding score continues the fine work the late Johann Johannsson brought to the original, all discordant strings and throbbing base. It is not a fun watch by any stretch of the imagination, revelling in its moral quagmire and violence. You will leave with a sense that there are some parts of the world and ourselves that can never see the light. Soldado means soldier and that is none more apt a summation of Sheridan’s goal here. We are all but footsoldiers in a war we cannot wholly control, the war for our very souls. Nothing that any force or wall can prevent from spreading. See what I mean about it not being a fun watch.

Verdict: A bruising brutal follow up, anchored on two terrific central performances, yet it never quite grasps the same elemental charge that solidified the first into greatness, particularly in its none more Hollywood genre cliches.