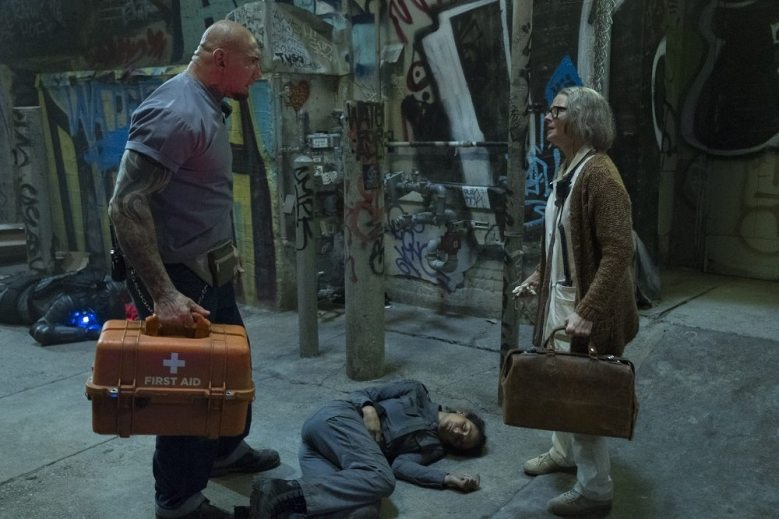 The year is 2028. Los Angeles is in the midst of city wide riots due to the rationing of water. The police have issued a curfew. Taking advantage of the situation two brothers attempt to rob a bank, one gets shot. They take refuge in the Hotel Artemis. Run by Nurse Thomas (Jodie Foster), a 13-storey members only hospital for criminals. However something the brothers has stolen is very valuable to the city’s criminal overlord, The Wolfking (Jeff Goldblum). He is on the way, madness will ensue.

This is the gist of Hotel Artemis and if that inspires memories of 80s B-movie genre pics with their slightly far-fetched concepts and simplistic scenarios then you wouldn’t be wrong. In fact there are a lot of similarities to that classic of this ilk, Robocop (but believe me this is nowhere near as good as that film) Artemis features futuristic yet believable tech, a criminal contingent that rules the streets, an omnipresent police force and lashings of graphic violence. Written and directed by Iron Man 3 scripter Drew Pearce, Hotel Artemis is efficient in its world building and adept at sketching its characters out thanks in no small part to a very strong cast.

At a brisk 94 mins (God bless shorter running times) Artemis moves with pace, introducing us to the Hotel within 10 mins. Our way in is through Sterling K Brown’s Waikiki (not his real name, rather the name of the room he is holed up in in the Artemis) who brings his deadbeat brother in after he is shot during a heist. Brown has always been a softly spoken coolly confident performer, able to tap into rivers of emotion using nothing but his eyes. Pearce uses him smartly, building on the frustrations he feels towards his brother after he routinely stops Waikiki from spreading his wings. Of course Waikiki is not alone. Also staying at the Hotel are former flame Nice, a ravishingly beautiful kick ass Sofia Boutella, and Charlie Day’s loudly wisecracking sleazeball (does he ever play anything else) Acapulco. They are all drawn into the chaos the brothers bring down as an object they’ve stolen belongs to the fearsome Wolfking.

Jeff Goldblum has minimal screentime as the titular crime boss but as per usual he makes it count. Devilishly charming, delivering withering put downs with aplomb, whilst maintaining an air of fear as befits the incessant build up the film makes setting up his arrival. It is just a shame he, like in this years Jurassic World sequel, only features briefly. All these characters get their moments to shine, Boutella’s hallway fight is a film highlight, but the beating heart lies in the Artemis’s manager, Nurse Thomas. Jodie Foster returns to the screen after a 5 year sabbatical, and although a low budget schlockly action film seems a strange choice the role has a surprising amount of depth. Grey haired, wrinkled and timid on the surface but underneath is a core of steel. Loyal to her rules, caring to her charges and calm under pressure, Foster is immensely enjoyable to watch.

As the film develops though we learn there is a tragic aspect to her being the unexpected leader of this seedy Hotel. One that is revealed via simple but effective flashbacks, and one that Foster sells with aplomb. Her weathered face breaking down into tears as the night forces her to challenge herself to tackle the past once and for all. At least she has the affectionate support of Dave Bautista’s big hearted Orderly, tapping into that lovable hulk persona he has honed into a fine art, whilst of course kicking some ass. Pearce made a wise decision casting all these charismatic performers, they elevate the low budget feel into something more substantial. Situated mainly in the one set Hotel, Artemis isn’t exactly large scale but Pearce has some noble ambition, crafting a few bigger moments when he can. The Hotel itself is nicely designed, all lavish old Hollywood decadence and architecture intermingling with the futuristic technology that the Nurse leans on.

In fact Pearce frequently oversells the technology aspect, every scene has at least one gadget or medical tool that feels believable if maybe not 10 years in the future believable. It sometimes undersells the reason why people visit the Nurse at all as all she tends to do is press a button to fix their injuries. Although praise should be given to death via 3D printer. There is also far too many instances of characters stating philosophical platitudes i.e “getting out is harder than getting in” and then another character repeating it back to them almost two scenes later. I’m pretty sure if you took a shot every time this happened you’d be hammered before the 30 min mark.

Still despite the weaknesses of the script, there are still some zingers to be had mind you (probably an influence of working with Shane Black on IM3), and the budget limitations Hotel Artemis is inventive and enthusiastic enough to offer plenty of Friday night thrills. It is a universe I’d be happy to see more of, and proof Jodie Foster needs to be on the screen more.

Verdict: Make a reservation for an overzealous pulpy sci-fi that never feels cheap and maxes out its appealing cast, despite its budget and script limitations.