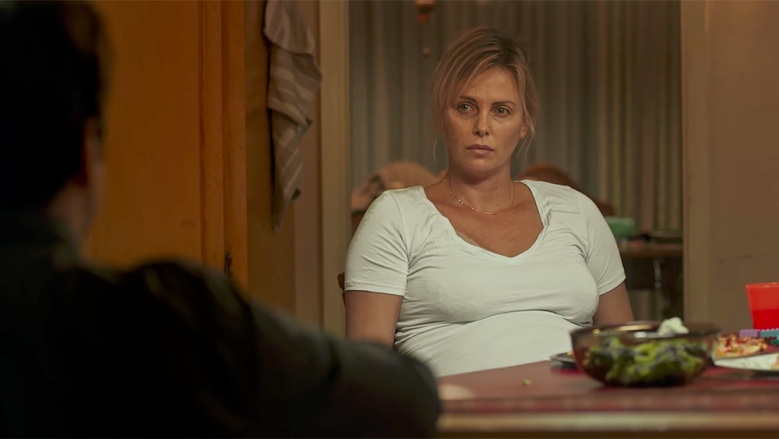 You only have to ask the mum from Home Alone, being a mother is tough! Sleepless nights, exhaustive repetition and the prospect that despite all your efforts your child could still grow up into something disappointing or even worse downright horrifying (see We Need to Talk about Kevin). If the movies are to be believed however the stresses of motherhood can easily be overcome by a sentimental realisation that the smile on their little faces make it worth it, or even as simple as finding a hot man. When it comes to being a mother Hollywood steadfastly declines to tackle the real complexity of such a momentous part of human existence. Oh I am not being cynical by any means, as a man I will only ever partially understand the beauty and challenge that comes with delivering a child into the world, but Tully captures this experience with pertinent insight alongside an outstanding performance from Charlize Theron.

Theron plays Marlo. Heavily pregnant with her third child, she faces a day to day battle keeping her children entertained whilst attempting to tackle the routines every parent must face. It certainly doesn’t help that her young son is a handful, his school classing him as quirky when we all know this is simply code for retarded (something Marlo brings up in one of the films many caustically funny confrontations). Couple all this with Ron Livingston’s decent if ultimately neglectful husband, then it’s no wonder Marlo is weighted down with barely contained anguish. Her chilled brother (Mark Duplass) implores that something isn’t quite right with Marlo, suggesting the hiring of a night nanny when the baby comes. Hints are made that there has been mental trouble in the past for Marlo, but nothing is made explicit, a tactic that the film uses throughout to winning effect.

Upon the arrival of her new little one, things begin to escalate to the point where she has no choice but to ask for help. In comes Tully. Energetic, calming and joyously upbeat, Mackenzie Davis continues the strong work she has demonstrated in the bit parts she’s played over the last few years. A searching presence, capable of moments of keen yet naive intellectual outbursts alongside realisations that she is still just in her 20s, unaware and slightly overwhelmed by the prospect of getting older. Tully brings things out in Marlo that she’d long forgotten. A chance to sleep for one thing. And a rediscovery of what it means to be a parent. Theron is utterly transfixing as Marlo. An actress who has always been more than willing to shorn away any signs of vanity or image. We see her exhausted, agitated and unafraid to let it all hang out, literally. It is a performance of honesty and frankness, without calling attention to itself. In a career spanning a Furiosa and a Monster, this may very well be her best yet.

Theron is gifted a director and writer with a strong grasp on the material. Paired together once again with spiky scriptwriter Diablo Cody, Jason Reitman handles things with a confident measured tone. There is a sense this time that the two of them have done some growing up. Previous collaborations have been terrific (Juno and Young Adult particularly) but have too often felt too clever for their own good. Cody prone to drift into one too many layers of snark, Reitman only too willing to back it up with a adolescent temperament (see Jennifer’s Body for proof of that). He has done maturity before, notably in the pained Up in the Air, but here the two seem perfectly in sync of how best to deliver the material.

The script is biting but not laced with one liners, characters feel real without sounding like mouthpieces for verbose dialogue cartwheels and the direction has a refreshing unfussiness. Gently coaxed on by a well-thought out soundtrack, Reitman’s camerawork is restrained throughout. This restraint comes in handy when combined with the unflinching nature of the events we see. Reitman never seeks to magnetise or oversell allowing us to explore alongside the characters. Except in the films fixation with Marlo’s swollen breasts. Sore from the frequent milk she expels from them, they are the source of one too many scenes as if Reitman hasn’t made it clear enough just how honest his film is. Occasional other moments also skirt a little too close to silliness, notably in the on the nose imagery of a mermaid that Marlo keeps envisaging, one which doesn’t reveal its true meaning until a final act twist.

Yes, surprisingly Tully features a plot twist that is very hard to see coming. Hints are laced throughout and some (cleverer than me) people will probably figure it out, but after some adjustment as to the sudden escalation of events, especially after the low key feel of the rest of the film, it wraps things up in an emotionally devastating blow. A turn that morphs the film into more than just a treatise on motherhood but one concerning marriage (Livingston adds no small measure of painful heartache come the end), adolescent regret and depression. And all in 98 mins. Tully has stuck with me since I saw it. It is a quietly complex and emotionally rich adult tale. Some would suggest not seeing this if you plan on having kids but Tully is way shrewder than standing on one soapbox, Cody never forgetting to add the moments that do make parenthood worthwhile. Sure they may not be lavishly sentimental moments of heart-swelling declarations. Instead they are snatched glimpses of affectionate exchanges, or comedic interactions that only having kids can provide. Tully shows that having kids is fucking tough, and no amount of Hollywood glamorising can disguise that.

Verdict: Tully is a painfully honest look at what it means to raise a child, centred on an outstanding career best performance from Theron.