Last week I found myself doing something I hadn’t done in a long time, venturing to the cinema for a three in a row film whammy. I’d forgotten just how fun these can be, gazing upon multiple films all offering differing experiences. Sometimes you can gauge in just the right way that the films in question compliment each other. Going from a noisy bombastic blockbuster to something quieter and more introspective allows you not to feel overwhelmed by what really amounts to spending an entire day on your arse in a darkened room. Although occasionally you leave yourself open to such opposing experiences, like the time I saw the new updated Muppets film after the horrifying darkness of The Woman in Black. This triple happened to be pretty well thought out (not to toot my own horn), combining a couple of brash noisy blockbusters (of varying quality) with a low key Brit horror of surprising depth….

I will lay it all out here. I love Dwayne Johnson. He has managed to take a successful prolific wrestling career and evolve himself into one of the most charismatic bankable actors working today. Skilful in his sense of comedic timing, formidable in his physical strength (but never afraid to poke fun at said stature) and blessed with that incandescent ability to make whatever he stars in seem like utter fun. Sure he has moulded his image to a certain level, and is somewhat afraid to challenge himself away from that, but there is no denying that it works (hence the nickname Franchise Viagra). Alas the Dwayne Johnson effect is not 100% foolproof, first came 2016’s dire Baywatch and now we have this video game adaptation. Directed by Brad Peyton, who also steered the outlandishly silly Johnson vehicle San Andreas to solid success, tackles a filmic version of the classic 80s game. One in which players took hold of one of three gargantuan beasts and laid waste to numerous environments with no regard for public safety. Now you’re probably asking yourself whether there is a film to be found within this thin concept and you’d be absolutely right that there really is not!! I can see what Johnson (who also produces) is trying to do here. Giving us a tongue-in-cheek piece of silly nonsense that usually goes down pretty well in the blockbuster months, similar to the unexpected almost billion dollar earning Jumanji: Welcome to the Jungle last December. But whilst that film utilised an energetic cast and a playful screenplay, Rampage limps out of the gate with no sense of its identity.

In order to successfully nail the right mixture of cheesy silliness and far-fetched if believable world building you need focused storytelling. Rampage has a story but for the life of me I cannot ascertain the tone it is reaching for. Opening with a surprisingly intense sequence set in space as a monstrous mutation begins to rip apart a space station and its crew. Before the chemicals responsible for it crash land to Earth, infecting 3 animals, one of which is albino gorilla George. A mo-capped creation, and one given a decent amount of emotive cheeky character to endear the audience. Johnson plays his handler, or captor, or trainer, I’m not really sure what he is meant to be. Of course he also has a military background, how else could an animal handler kick all kinds of ass and pilot a helicopter?! Into the mix we also get Naomie Harris’s disgraced scientist, attempting to foster some sort of sexual chemistry with a man not normally associated with sexy charisma. Jeffrey Dean Morgan as a shady Government operative, and the only one with any semblance of an idea that this isn’t material to be played straight, hence lines like “when God shits the bed, I’m the man who changes the sheets” delivered with a knowing and playful smarm. The cast is not helped by a script rife with howling clangers of so called comedy, thin characterisation and the worst villain known to cinema. Played by Malin Akerman, her malevolent CEO takes on the brunt of the clunkiest lines, offering up about as much menace as Chris Hemsworth cuddling a cute puppy.

Fortunately the action is suitably massive, with the last act finally tapping into the brash fun the concept predicted. CGI is effective save for a woeful moment featuring the main stars falling through the air that very much feels like they were sitting on a chair in a warehouse surrounded by greenscreen. Rampage is sporadically enjoyable but intensely forgettable. Let’s hope this Summer’s other big Dwayne Johnson blockbuster, Skyscraper, remembers to bring some brains with it.

I adore Guillermo Del Toro, however his Pacific Rim did little for me. Now a second watch solidified it as a broad, family-oriented picture, blessed with those notable Del Toro handmade touches but it still remains crippled by base characterisation, dimly lit action and generic storytelling. Still I wasn’t too keen on a Del Toro-less sequel, even the Mexican auteur at a lesser strength can still provide more personality than 90% of Hollywood’s output. Taking the reins is Daredevil showrunner Steven S DeKnight, another move that doesn’t exactly elicit excitement seeing as he has little in the way of big budget experience. However I have to admit Uprising is huge huge fun, namely because of one man, John Boyega. Fresh off his immense success as Star Wars’ new hero, here he not only serves as Producer but as new lead Jake Pentecost. Son of Idris Elba’s ‘Apocalypse Cancelling’ General in the first flick, but one who is trying hard to escape the shadow of his father’s self-sacrificing hero. 10 years have passed since the events of the first film, with Jake scavenging left over parts from the city-levelling battles between the Kajiu and the ginormous robots built to fight them. An unfortunate coincidence pairs him up with a young engineer, in turn dropping him back on the radar of his estranged sister Mako Mori (a returning Rinko Kikuchi) and into the Jaegar training program. Just in time it seems for the rise of a mysterious new enemy.

Plot wise Uprising is not going to break any barriers for originality, particularly in the young recruit training sessions that cliche the screen up frequently, but there are some genuine surprises in the films second half that kept me hooked. DeKnight, who also scripts alongside 3(!) others, layering in some nice build up and paying everything off in a finale of immense scale. Unlike other blockbusters of this sort he saves the true fireworks until last, without feeling the need to overplay his hand too early. What certainly helps is the majority of the action is set against bright daylight, allowing you to appreciate the sterling ILM CGI and explosive destruction. Most blockbusters, including its forebear, tend to mask weaknesses in effects work and cheaper budgets by darkening its action environments, not so here. Through it all John Boyega maintains a strong energetic centre. Other cast members veer from the bland (Scott Eastwood’s dull Jaegar pilot buddy), to the eccentric (a returning Burn Gorman and Charlie Day) to the generic but likeable (the newbie Jaegar recruits). But Boyega brings his laidback London lad vibe to the table, making for a winning accessible lead, capable of cutting through the far-fetched silliness of things but still delivering a call to arms speech with the best of them. Uprising is cliched, thin and poorly scripted at times, yet it never fails to entertain with bright bold colours. 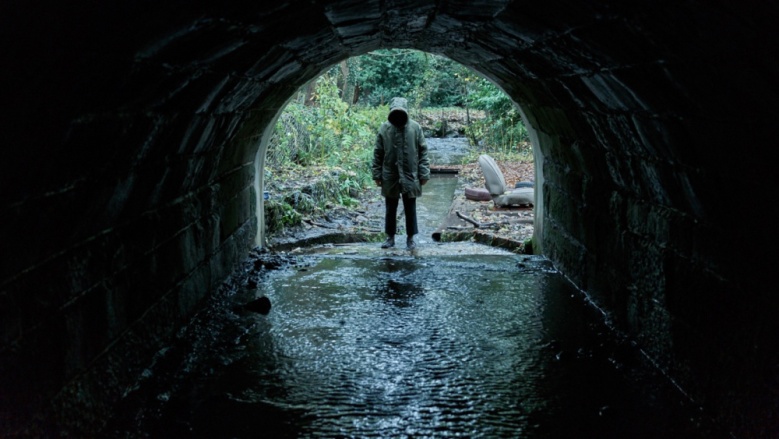 The Brits have always had a way with horror. Perhaps its our ability to never over-sensationalise things, or the bleak landscapes of our Northern parts inspiring a love of haunting myth, or perhaps we just have a fucked up mentality that chimes well with dark tales of fear. A successful stage show, Andy Nyman and Jeremy Dyson now bring their anthology piece to the big screen and have conjured a rollercoaster ride of old school scares and thematic riches. Unlike most anthology films, Ghost Stories builds its 3 creepy tales around an overarching story that has a terrific payoff. Nyman also stars as Professor Goodman, a psychologist and skeptic, who confronts fraudster mystics and Gothic horror legends with a piercing yet exasperated intellect. Goodman would like to believe that their is such a thing as the Supernatural but cannot reconcile his religious and scientific background with these lofty fantasies. Into his life comes a long lost file of 3 unsolved and terrifying cases. He journeys to meet the players of these tales, as he does he falls ever deeper into a hole of fear and despair. Filmed with a grey brooding atmosphere, its lack of a determined time period adding to the overarching feel of unease, Ghost Stories takes its time. Goodman steadily building himself from skeptic to potential unwitting player in a horrific endgame.

Each story has its own vivid feel. Paul Whitehouse, who reminds us all that he is in actual fact a remarkably gifted actor conveying rivers of sadness with nothing but a to-the-camera monologue, kicks things off with a haunted house trip into a former mental asylum. Then the sweaty Alex Lawther arrives as a young man terrorised by a malevolent beast, playing more like a twisted monster movie before Martin Freeman’s tormented father to be caps things off with a Conjuring-esque home of horrors piece. Each feels similar but with enough characterful differences to mark them out as separate entities. Due to its stage show origins (of which I’d love to see) and low budget, the scares are remarkably in-camera affairs, using sound and light in place of OTT bouts of CGI nonsense. It also helps to have a bevy of performers who all play things slightly to the left, building a steady sense of dread. Freeman in particular mines a genteel ferocity that plays out nicely in the final moments. Moments that focus the three disparate tales into a revelation that is unexpected and surprisingly devastating. I am loathe to spoil it as it is something you need to discover yourself but suffice to say it will make you want to immediately go back and watch again. After the dust settles you realise just how clever the films’ use of foreshadowing and repetition has been, little things such as audible tics that seem innocuous end up becoming vital pieces of the puzzle. I’m sure some may not chime into the gentle build up of character and story, especially those expecting a traditional horror, but it is nice to see a confident assured debut from filmmakers I cannot wait to see more from.