I must apologise it has been awhile since I have posted anything other than a film review, finding a wonderful woman who you just want to spend all your time with will do that (forgive me for the cheese), but I had to delve into what has become a major movie event-the first footage from Avengers: Infinity War!

It is hard to believe it but the Marvel Cinematic Universe will be turning 10 years old come next May. In that time producer extraordinaire Kevin Feige and his team will have conjured up 19 films (including the upcoming Black Panther) and utterly changed the cinematic landscape. A gentle beginning with a brief cameo from one Nick Fury at the end of Iron Man, slowly built into a true comic book world wherein characters began to interact with one another, events from one film feeding into another. Unlike the slapdash desperation of DC films, Universal’s Dark Universe and numerous others, the MCU has worked simply because its interconnected nature is fine tuned, (despite a few hiccups along the way) characters given room to breathe and the creatives behind the scenes given measured but enough free rein to add personality where it counts.

Infinity War and its 2019 follow up will represent something even ballsier than this original universe, a finale. Of course the MCU will continue afterwards, $5 billion in revenue will do that, but with entirely new blood and a much different focus. What that will look like remains to be seen, but what that does mean is Infinity War will witness actual death for once. One aspect the films have always suffered with when it comes to dramatic tensions. Marvel have told The Russo Brothers (who have returned to direct both films after their Cap America double bill) who can and can’t die, but with most of the old cast at the end of their lengthy contracts come 2019 it doesn’t take a genius to see who may be for the chop.

Anyway I digress, let’s take a glimpse at the trailer, one that has already broken records for most views in 24 hours, 230 million and counting….

Man that final shot alone just raises all sorts of goosebumps, and not just because of Cap’s breathtaking new beard. And this is but a glimpse of a film that promises to have, at one point, over 30 characters fighting together!!

Key points of note to make: 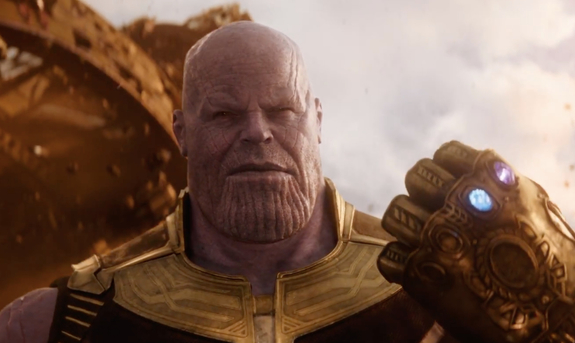 Marvel have never done a true epic Lord of the Rings style battle before so it feels apt that their biggest film to date should manage to squeeze one in.

We also do get a very brief look at one of his henchmen dubbed The Black Order, but it is so quick it is very hard to catch a screenshot. Suffice to say there are 5 of them and they’re not to be trifled with. It is one of those we see removing Vision’s stone and tossing a spear at Cap.

The freakin Guardians of the Galaxy. (Note teenage Groot). A shot designed to really stoke the general movie-going public who may not be aware of how all encompassing this film will be. It’s also intriguing to note that this will be 2 years after the ending of Guardians Vol.2 so it’ll be strange to see what has happened to them in that time.

All in all a tantalisingly brief first glimpse, one that does just enough to sing to the fanboys hearts whilst luring in the general fans, not to mention really selling the grand scale of proceedings. Make no mistake about it Avengers: Infinity War will be huge come April 27th (and yes that is over a week before the yanks get it 🙂 )!