Synopsis: Over worked and under appreciated moms Amy, Kiki and Carla decide to rebel against the challenges and high expectations that Christmas puts on them. Planning the perfect simple Christmas gets difficult, however, when all their respective mothers come to town, each with their own eccentricities and plans for the big day. 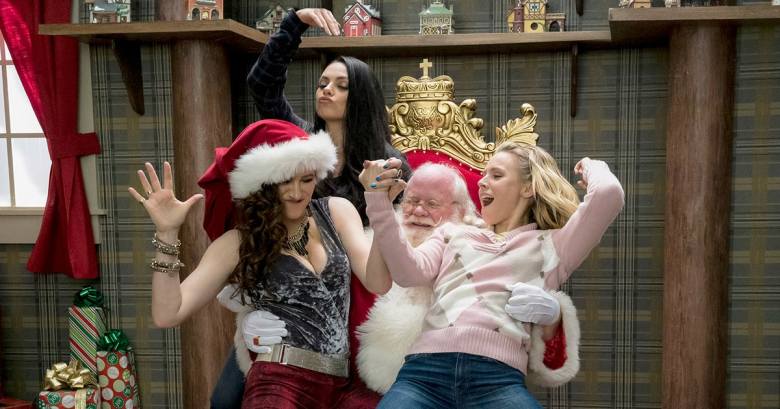 It used to be a staple of any big comedy franchise, TV or film, that inevitably a Christmas special would come along. The Muppets did it, National Lampoon did it, heck even the Carry On films did 4(!) of them! Unfortunately they would normally be haphazard affairs (The Muppet Christmas Carol notwithstanding-possibly my favourite xmas film) quickly thrown together to capitalise on the Holiday season and generally a series of sentimental skits barely linked by a thin storyline. Over the years, thankfully, they’ve fallen to the wayside a tad, but here come the Bad Moms to bring it back to the fore with very little inspiration.

Only released last year, the first Bad Moms was a likeable solid comedy helped along by three strong central performances and a refreshing portrayal of full blooded actual women; never driven by the men in their lives, the film championed career women, sexually voracious women and motherly women without ever demeaning them into ciphers. Owing to a strong box office performance less than a year later we have this weakly concocted Christmas outing that has very little to say beyond what has been said countless times before. The fact it was conceived and produced in such a brief time frame becomes quite obvious.

The plot, as it were, is split into the 3 respective mothers having to deal with the arrival of their own mums for the holidays. Faced with the overbearing and ridiculous expectations thrown on mothers to make every Christmas perfect for their children, Amy, Kiki and Carla (Kunis, Bell and Hahn respectively) decide to say “fuck that” and just have a relaxed, no nonsense Christmas. Returning writer/directors Jon Lucas and Scott Moore have a kernel of a good idea here, and could have easily turned the dial up some more, but they pretty much abandon this notion almost immediately. They seemingly only came up with the idea in order to facilitate a crazy montage of the threesome getting drunk in a mall and causing havoc. Funny it may be, with its Santa gyrating and Christmas tree stealing, but it is all too brief, the group never once returning to the sort of lewd behaviour that so energised the original.

Kathryn Hahn still provides a nice dollop of crass sassiness as Carla, uncouth and brash but warm towards her dim-witted son. Her mother arrives sozzled and after money, proving that this sort of behaviour has been very much passed down. Susan Sarandon has a lot of fun as the titular mother, albeit the film never quite gives her the gold standard comedy lines that her performance deserves. The less said about their woefully thin relationship tensions the better, you can see the resolution coming several hundred miles away! Hahn herself is also giving a rather tightened amount of screen time. Outside of the mother angle she gets a rather unwieldy plot line surrounding a Santa stripper. One or two laughs are to be found here, particularly in an utterly odd but humorous waxing scene, but A Bad Moms Christmas is under the impression that stripper dancing is hilarious. Repeatedly showing scenes of hunky men gyrating, and in an even more egregious move having the entire cast dance like it over the credits. Gone is the subtle empowerment message of the first film, instead we just have women lusting over naked flesh. Sigh!!

It is certainly better value at least than the hopelessly unfunny segments Kristen Bell has to deal with. Her naive childishness was a highlight of the first film, Bell amping up the shy cheekiness to hilarious effect. This time we meet her suffocating and light-headed mother played by Cheryl Hines. Dressing herself in clothing with her daughters face on it and buying the house next door, she is obsessive to the point of madness. Sadly the film can never find the laughs in this, outside of some fun impish delivery from Hines, to the point where a cancer joke lands with all the hilarity of…well cancer! I’m all for dark humour but there needs to be some sense of intelligence behind it. Thankfully the film spends very little time on their storyline, leaving the brunt of the running time to focus on Mila Kunis’s Amy.

This is by far the strongest material of the film, not so much for its originality, but for the skills of the always euphoric presence of Christine Baranski. Desperate to have a quiet lazy holiday, with her new beau (Jay Hernandez-forgettable) and the kids, she gets far from it when her mother and father (Peter Gallagher giving an affectionate performance) drop by to stay. As Ruth, Baranski is at her acid tongued venomous best. Her face a contortion of straightness, menace and emotion. Determined to make the family Christmas the best one yet, by doing such things as carolling in Charles Dickens garb, seeing The Nutcracker in its 5 hr Russian form, or conjuring up decorations of insane expense, she puts a tension on Amy that can only end one way. Cliched and familiar it may be, the tough as nails mother who pushes and pushes her accepting child to breaking point, who then fall out only to reconcile in time to save the holiday, but Baranski blesses Ruth with a modicum of touching sadness. Crippled with insecurities, she sells these vulnerabilities in-between delightfully wicked put downs. A running gag about her lavish constant gift giving to the kids is superb. Kunis is still a slightly whiny but capable lead, yet it is Baranski who makes the film as fitfully entertaining as it is.

It is just a shame to see 6 talented female performers given such woeful material. Consistent giggles come throughout but nothing truly makes you laugh out loud, especially when most of the humour stems from tired slow motion scenes of people being hit in the face with balls. A Bad Moms Christmas just about warms the heart, particularly in a tearful encounter between Kunis and Baranski, but the lack of a tangible story bedrock to anchor proceedings it frequently just feels like a series of skits collected together. Lucas and Moore have suggested that this could lead to more holiday themed outings for the Bad Moms, which based on the evidence here feels about as welcome as that Christmas gift you want to love but secretly pray they’ve kept the receipt for.

Verdict: A Bad Moms Christmas gets on by thanks to the disarming charms of its leads, particularly a wondrous Christine Baranski, but thin laughs and even thinner storytelling leaves it all feeling rather slapdash.