Synopsis: In 1953 the power and control of dictator Josef Stalin is at full peak. Murders and kidnappings are rife, orchestrated by his head of security Beria (Beale). After Stalin’s unexpected death there becomes a feverish grasp for power between the members of his Government Counsel, which is equal parts chaotic and farcical. 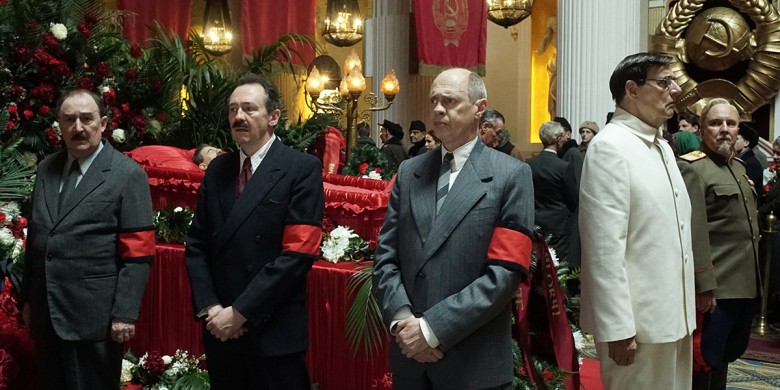 I do believe it was the great masterpiece Patch Adams that taught us laughter is the best form of medicine. No matter what pain, despair or sorrow you may be feeling a simple belly laugh will lighten the burden. Now this may very well be true of individual acts of sadness or suffering but in the context of tragic historical moments mere laughs could risk undermining those that faced great loss. I’m sure even Tom Shadyac (the wisened director of said Robin Williams vehicle for those unaware) would have thought twice about dropping comedy bits into a film about the Holocaust or 9/11. Bravo to writer/director Armando Iannucci though, who follows up his acerbic brutally funny debut film In the Loop, with a tale steeped in what on the surface is some very dark stuff indeed. But he manages to interlace wicked humour and a mastery of tone that never undercuts the horrors of this chaotic political landscape.

It is 1953 and cruel Russian dictator Josef Stalin is at peak monstrosity. The gulags are chock full of malnourished desperate prisoners, and routine murders are carried out against so called dissidents who more often than not just irk Stalin rather than being masterminds of  diabolical plotting. Paranoia, fear and surveillance are the order of the day, with Iannucci perfectly capturing this in the opening 15 mins. The film intercuts between a music hall performance desperately reconvened to record on tape after Stalin demands to hear it, and in doing so stretching the palpable terror of the producer (a deliciously sweaty Paddy Considine) to breaking point, an evening get together of Stalin’s close counsel and the horrifying round up of his latest targets for execution. A barely contained farce clings to these moments, but always with an underlying pertinence as to just how frightening daily life in the Soviet Union was. No greater is this felt than in the matter of fact nature Stalin’s monstrous Head of Security Beria demonstrates. Calmly describing how best to execute those selected to die (“make sure this one is shot in front of his wife, then kill her” is one such exchange) with a lackadaisical manner akin to reading ones shopping list. Its genial approach to murder is shamefully laugh inducing.

Befitting a film titled The Death of Stalin, it would not surprise you when not much longer after this insightful prologue the man himself suffers a brain haemorrhage and passes away. But not before a wicked bout of farcical chaos as those around him argue over when to call a doctor. You see surrounding Stalin are his loyal (well up to a point) counsel, and Iannucci introduces every one of them in surreal moments of slow motion coupled with handy visual guides. Each has a desire to use the void left by Stalin’s death to either replace him or move those they wish to rule into place. Central in this battle are Beria and Nikita Khrushchev. Continuing his gift for casting dynamic comedy performers Iannucci has rounded up some heavy hitters here. Utilising the intense spittle filled Steve Buscemi as Khrushchev turns up gold, the man desperate to squirm his way into power but doing so with a particular lack of grace. Surrounding bit players range from a much missed Michael Palin, a sneering Paul Whitehouse, a wonderfully dim Jeffrey Tambor and Rupert Friend as Stalin’s hopelessly inept drunken son. Each gets a choice moment or two to shine, but never overpowering the rest. It is an ensemble of measured balance.

Of course as with all ensembles some stand out just a little bit more than their brethren. The Death of Stalin has two of those. Jason Issacs is a latecomer but is an uncouth brash delight as the head of the Red Army General Zhukov. In an inspired move Iannucci hasn’t bothered asking his performers to don flimsy Russian accents instead everyone speaks with their own regional brogue. From Buscemi’s twangy American voice, to Adrian McLoughlin’s none more British dialect as the titular dictator, but whilst the rest use their own accents Issacs decides to adopt a distinctive Yorkshire accent. It provides a strange surreal effect to proceedings and certainly helps to boost up the comedy quotient, heightening the madness to breaking point. Alongside Issacs though is a grubby wicked performance by Simon Russell Beale as Beria. Dressed like a sort of  Russian era version of Batman villain The Penguin, he is a man at home in violence and not averse to sickening acts of depravity (there are numerous hints to sexual abuse of young women) but capable of gentle warmth and withering put downs of his fellow counsel members. It is a complex, deeply enthralling performance and by far the standout.

Despite working within the confines of a limited TV budget on The Thick of It and the remarkably uncinematic In the Loop, Iannucci has upped his game as a director here. Evocative of the time with lavishly detailed production design, large scale crowd scenes and a richly rewarding score, The Death of Stalin never feels like a chamber piece. There is perhaps a overwhelming nature to the dialogue, witticisms and long 2-on-2 conversation battles dominate the brisk running time, with names and settings flying at you to the point where you struggle to keep up. Further to that the deep delve into Russian political manoeuvring, whilst seemingly clever, feels oddly distant to those in the audience not schooled in Russian history (of which I’m sure there are many). Unlike The Thick of It or Veep, wherein we understood the little in jokes and nuances, Death of Stalin cannot help but lose some of its satirical comedic power. There is a helpful dollop of exposition and the characters are sketched adeptly enough that we can infer but a number of beats flew over my head. It is funny but not quite belly laugh funny, a number of sections feeling a little dry unlike the quickfire rat-a-tat-tat of In the Loop.

It cannot be denied though that in stepping back into our recent past Iannucci has made some troubling comments on our here and now. How easy it is for fear and intolerance to make its way into our political structure. The sheer lunacy of those in Government. The way horror too often presents itself in such everyday dealings. A callous moment in his debut film In the Loop sees James Gandolfini’s American General calculating how many US troops will die in the Middle East using a child’s calculator within a kid’s bedroom. The Death of Stalin is that scene across 104 mins. Terrible moments in our history played up to their full absurdity. The fact Iannucci still can throw in sequences of silly physical comedy amongst the bloodshed is a mark of a true tonal master. In its final scenes Iannucci reminds us that all this political backstabbing and chaotic power play is never-ending, no matter what we may remember from our past tragedies we never truly learn. It is right that we need to find the humour in all this because if we don’t, then all that is left for us to do is weep. Patch Adams may have been onto something.

Verdict: Although it doesn’t quite sustain its chaotic brand of comedy for its entirety, The Death of Stalin is still witty, biting and deftly skilled at balancing brutal darkness with farcical nonsense.