Synopsis: 2 years have passed since Ultron, Thor has been spending that time searching the galaxy for the elusive Infinity Stones. Upon hearing that all is not well on the throne of Asgard he returns to find Odin missing and Loki in control. His return unfortunately coincides with the arrival of Hela (Blanchett) Goddess of Death, who seeks to bring upon Ragnarok aka the end of days. Their first encounter results in the God of Thunder being left astray on the gladiatorial planet Sakaar, where he must do battle with an old friend, The Incredible Hulk. 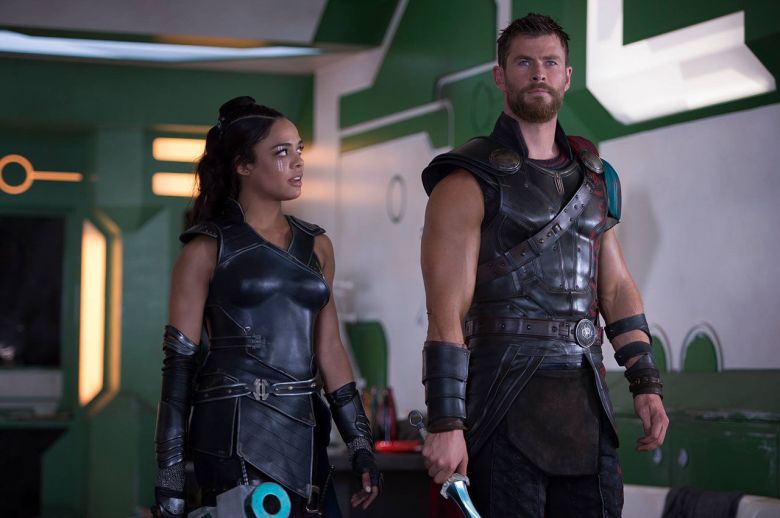 How do you solve a problem like Thor? One of the more tricky characters to adapt, his pomposity, the overwhelming depth of its world of Gods and strange worlds, and the outlandish nature of its setting compared to the grounded world of Iron Man left many wondering how the bean counters at Marvel could pull it off. Kenneth Branagh did a capable job, his emphasis on the Shakespearean ham worked due to performers strong enough to make the material sing, but it was the fish out of water comedy that worked best. Joss Whedon capitalised on this by further pushing the comedic nature of this odd man out within the dynamics of The Avengers, not to mention realising Chris Hemsworth’s delightful comedy timing. Sadly those lessons were not developed in the gloomy, po-faced Thor: The Dark World, and even his return in Ultron was dragged down by some strange hogwash about the end of Asgard. Thank god then for Taika Waititi.

A random choice, even by Marvel’s standards for picking directors with singular voices. Anyone who has seen his glorious Hunt for the Wilderpeople or What We Do in the Shadows can see his predilection for genre play, oddball characters and unique comedy interplay. But unlike a Shane Black or James Gunn, while distinct voices themselves, who seemed more easily at home within the world of big budget filmmaking. Waititi appeared too niche, too insular, too independent for a chance to play in the madhouse that is Marvel. Thor: Ragnarok has certainly proved me wrong. It is brash, colourful, deeply weird and a helluva lot of fun.

There are some struggles in the first act, however. Outside of a silly prologue sequence that sets Waititi’s stock out plain and clear. Witty one liners, well choreographed action, Led Zeppelin’s Immigrant Song booming out, and some truly wacky visuals (fire dragon anyone!), proves that this is a film all too aware of what it wants to be and is not afraid of it. Unfortunately we then leap forward rather awkwardly for 20 mins or so whilst Waititi puts the pieces in place for the main story, which while not an issue per se (all films need to spend their openings preparing the key story beats) winds up feeling all too rushed here. A welcome if utterly superfluous cameo from an MCU favourite certainly seeks to drag things down. There is also a troubling lack of emotional weight to these early scenes, the loss of one major character lacking the palpable sadness it truly warrants, coming so early in the film certainly doesn’t help.

Soon enough Cate Blanchett enters the picture to ramp things up as evil Goddess Hela. Dressed like some late 90s glam rocker, deep eye shadow and a terrifying headdress of spider like horns, she carries it off with a calm authority. Ragnarok still doesn’t quite get over its villain issues, Hela given a generic army of character-less bots and sitting out great chunks of the film, but Blanchett captivates when it counts. Her gleefully mowing down copious soldiers is given added kick when you realise this is an Oscar-winner doing the chopping. Her introduction and subsequent fight with Thor, results in his hammer destroyed (this film refreshingly welcomes the breaking down of familiar elements), his planet under attack and him cast off onto the planet Sakaar.

At this point Ragnarok truly comes alive. You sense that this was the section of the film Waititi was given free rein to play. Outside of these sections there is fun to be had but a subtle detection of his individualism being ironed out to fit into the Marvel mould. On Sakaar though it is a cornucopia of creative abandon. A trash planet populated by all manners of strange, unique and non-CGI’d creatures. No sooner does he crash down than Thor is captured and brought to the leader of this world, The Grandmaster. A delightfully welcome Jeff Goldblum brings his token eloquent madness to the table, equally threatening and preening his way through some playful encounters with our heroes. It is here we also meet Tessa Thompson’s Valkyrie, and she continues to build on her sterling work in Creed with a performance of fierce capability. Shaken by events from her past, and immediately rubbing up against the brashly confident Thor, she bounces between vulnerability, gleefully beaten up bad guys and silly physical comedy with deft skill. I’m excited to see where her character goes down the line.

Into this mix comes the best addition, and one that could’ve easily been a cynical cash grab, with the arrival of the big green beast Hulk as The Grandmaster’s prized champion. Stuck in his Hulk form for 2 years, and yes they do explain how he arrived on Sakaar, he is now able to form almost coherent sentences. After a gladiatorial fight which thrills, surprises and brings plenty of laughs, the warm banter that existed between them in The Avengers films is ramped up even more. There is perhaps a lack of proper character development, outside of Hulk speech and Banner coming to terms with being in space, but Ruffalo further cements how good he is in the role, hopelessly out of his depth in this new world and ironing that confusion out for maximum laughs. This lack of emotion is the one downside of Waititi’s focus on comedy. Occasional moments tug deeper, a heartfelt exchange between Thor and Loki (Tom Hiddleston great as always if a tad repetitive) or a starkly composed glimpse at Valkyrie’s past, but too often you cannot sense the weight of events on our heroes. Asgard is meant to be under torturous rule, with the people suffering, and despite Idris Elba doing his best as their protector Heimdell you never really get a sense of what is at stake. The little people frustratingly kept as ciphers, with the leads expositioning the dangers rather than us feeling it.

It is hard to stay mad at a film so driven to give you a good time. Big belly laughs are frequent and joyful to behold. Yes this may piss off the die hard Thor fans who prefer the grandeur and pomposity, but in given Hemsworth a chance to really cut loose (he is a dynamic comedy performer) Ragnarok has for once made him tangibly believable. Waititi is the real star here, managing to carve out his own personality within the broad Marvel machine. Visuals are a carnival of garish colour, all bold reds and glistening greens. Little background characters become beacons of whip smart humour, particularly the director himself selfishly given the funniest role to himself as the rock creature Korg. Joyous cameos seek to keep the laughs coming (one especially is pure hilarity). The score by Mark Mothersburgh is kitschy and fun with its 80s electronica. Even the areas Waititi is inexperienced in, namely the action arena, he takes to with consummate ease. Set-pieces are the right side of chaotic and the finale conjures up plenty of fan friendly moments. It is a sign that Marvel have honed their technique to a fine art; seek out unique voices, let them play and focus on providing pure entertainment. Thor: Ragnarok doesn’t break the mould but it does solve the problem of Thor, if in doubt just make em laugh!

Verdict: Once it gets over a sloppy first act, Thor: Ragnarok becomes a weird, bright, wickedly funny concoction of kaleidoscopic colour. One of the most purely joyous Marvel films yet!