Synopsis: 1983, somewhere in Southern Italy. 17 year old Elio (Chalamet) spends his days with his family in their 17th century villa. One summer American student Oliver (Hammer) arrives to study with Elio’s professor father (Stuhlbarg). Amidst the sun drenched atmosphere Elio and Oliver soon discover an unexpected heady desire for each other, with the next 6 weeks changing their lives completely. 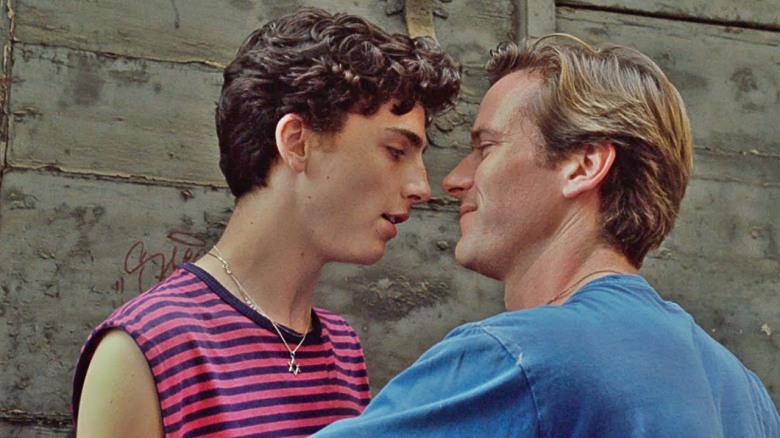 There is an elusive creature numerous film directors have tried, and usually failed, to capture, and that is love. Not just love in its broadest terms but more in its early days. Those moments wherein we discover a connection with another human being that elicits emotions we never expected, confusion, lust, pain, affection, the list goes on. Films have tried but too often confuse love for sentimentality. Dialogue becomes cheesy, the score tries oh so hard to be romantic and all that manages to convince is the strength of two capable performances. Call Me by Your Name does not have that problem, it understands and conveys the intoxication of palpable love, marrying that with an atmosphere you want to lose yourself in.

Said atmosphere is Southern Italy, the early 80s (although outside of a few technological clues it feels loosely timeless). The family estate of 17 year old Elio is isolated, peaceful and simply beautiful to observe. All around them lies nothing but glowing fields and gentle lakes, the only sense of population is the quaint local town, so quaint that the only bar to be found is simply called ‘Bar’. Similar to his work on last years A Bigger Splash, director Luca Guadignino captures a sense of place better than anyone out there. It is all in the little details, the sounds of nature, the smells of freshly grown fruit on the trees or the relaxed interactions between the locals. You can literally taste that holiday glow, and I’m not talking about those screaming family, buffet eating, all inclusive nightmare fests most traditional holidays entail. This is one of those you feel in your very soul. A chance to absorb another culture, a simpler way of life. One that you feel in your bones. I challenge all of you to watch this and not have the desire to pack up and venture out to the sun.

Into this stew of sun drenched lucidity we have Elio. A young man on the cusp of adulthood, confident if distant. He tends to watch from afar, observing and soaking in all he can learn. There is a freedom to Elio’s life, it appears he may be home schooled, smoking and drinking under the relaxed parentage of Michael Stuhlbarg’s father and Amira Casar’s mother. Both of them are richly intellectual (Mr Perlman is a history Professor) and refreshingly accepting that a 17 year old boy is going to drink, smoke and fuck. Every Summer Elio’s father welcomes an international student into their home to study, with this years being the American physical specimen Oliver. Armie Hammer has always had a chiselled from clay physique, his features undeniably handsome, and a voice hopelessly smooth. Guadignino seems just as enraptured by him as Elio does, the camera drinking Oliver in, constantly at a low angle bathed in light as if he is one of Mr Perlman’s beloved Roman statues brought to sensual life. Hammer rises above mere physical performing to capture a man stunned by what Elio brings out in him. Oliver is impulsive, hungry and euphoric for life, but there is a vulnerability just bubbling under the surface. One that this summer of love slowly brings to the fore.

Timothee Chalamet is the other player in this ballet of desire and he gives a tour de force as Elio. Routinely unafraid to reveal himself physically and emotionally, Elio can at times be brattish, cocky and a bit of a dick (so he has the teenager thing down to a tee). But all of it is driven by this uncontrollable confusion over his new found feelings. There is a fierce intelligence to Elio, Chalamet supremely dexterous at speaking multiple languages or playing the piano to his captivated family. But a poetic soul too, one only exacerbated by the introduction of Oliver. Guadignino frames most of this burgeoning relationship from Elio’s point of view, moving from hopeless infatuation to stubborn anger when Oliver moves attentions elsewhere to joyful elation when passions are finally given into. Wisely the film never explicitly sets out Elio’s firm sexuality, understanding the fluidity of teenage sexual desires. One moment of sexual expression becomes devastating in its exploration of masculine guilt. There is a bravery to Call Me by Your Name but one that never calls attention to itself, and Chalamet commits to that with his very soul.

The relationship itself is so evocative of newly formed love, it realising that it’s not all about the words but about touch, scent, gaze. A subtle stroke here or a watchful eye there conveying far more about the nature of desire than any saccharine monologue could deliver. Sensuality leaks out of the screen, but it is always tasteful. The sex scenes, when they come, are gentle and erotic. Subtlety is the name of the game throughout. Character dynamics are sketched out with efficient grace. Performances from the surrounding cast nicely naturalistic. Casar and Stuhlbarg being a particular highlight. She is a loving presence, vitally aware of what is happening but never judgemental. As is her husband. Stuhlbarg delightfully eloquent and patient, always on the peripheral of the central story, but being there for Elio when it counts. It may be a soft focused almost fantastical glimpse at a set of parents that may not actually exist in reality but they work within the confines of this ethereal universe. However a late film monologue heartbreakingly delivered by Stuhlbarg brings their relationship crashing down to reality. The realisation of love’s sorrow, pain and joy conveyed with such meaningful articulation that I was left a quivering wreck.

Call Me by Your Name is a film you want to live in, despite the drawn out running time. At 132 mins it is perhaps a touch too stretched out, but in some respects we require that time to effectively believe the slow development of their kinship. There is very little to fault though with a film that values acceptance, affection and gentleness. It is a tribute to those in, about to be, or who were once in love. At once drunk on life as it is appreciative of the pain life opens you up to. It is a soaring soulful masterpiece.

Verdict: Call Me by Your Name is sensual, sensitive and deeply passionate cinema, anchored by two captivating performances. Evocatively capturing a sun drenched atmosphere that all who watch it will be booking a ticket to Italy once the devastating final credits unfold.