Synopsis: Matty Burton (Considine) is a champion boxer battling to retain the title. After a fraught championship fight he suffers a catastrophic brain injury leaving him permanently altered, physically and mentally. Journeyman details how this affects those around him, from his loving wife Emma (Whittaker), to his closest friends. 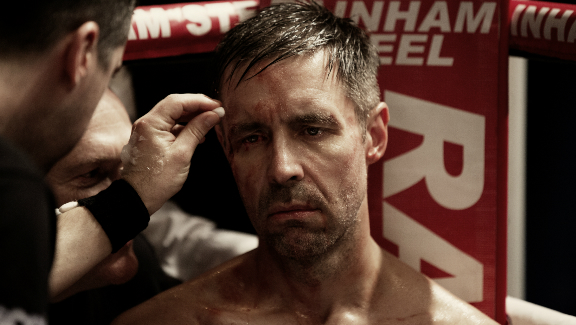 Few could have expected actor turned director Paddy Considine to announce his sophomore project would be a boxing movie. Tyrannosaur, his debut, was a remarkably assured, ballsy blast of home grown cinema. Bleak, formidable but carried across with a sure hand and keen eye for performance. A boxing film, however, sounded too generic, too underwhelming to provide opportunity for this fledgling new talent to grow. In a promising sign of his unpredictability though, Considine has crafted a boxing film that spends all of 10 mins on the sport it is based in. Instead this is something altogether more emotional, more broader but still retains the unflinching honesty that so strengthened his directorial debut.

Bravely Considine has opted this time to also lead the film, here playing legendary boxer Matty Burton. A man with boxing in his very blood, his treasured father also fought, but after clinching the title he feels the time is right to quit, focusing on his newly formed family. Incoming Doctor Who Jodie Whittaker plays his affectionate wife Emma, their coupling warm, playful and believable as they dote on young daughter Mia. Although there is perhaps one too many scenes of Matty kissing her infantile head, over emphasising what is already plain to see. Considine refreshingly gives Matty a quiet stoicism, with none of the brash dick-swinging behaviour you’d expect from a prized boxer. No more is this felt than in the pre-fight interviews him and his next opponent (in a fight that determines whether he gets to retain the title) have with each other. Anthony Welsh gives Andre the required brash cockiness and in your face attitude to accentuate just how calm and respectful Matty is. Albeit when push comes to shove Matty is certainly capable of getting aggressive.

The one final fight plot beat is no doubt a cliche, but Considine works hard to at least give the fight in question a distinctive feel. With so many boxing movies it has become quite difficult to offer anything new but with this fights’ intimate nature, muffled sound effects and focus on the sheer exhaustion of punching another man in the face over and over, it stays in the mind. I’m not going to spoil the outcome here, but Journeyman really isn’t concerned with such trivialities, instead we witness Matty return to his loving home only to be overcome with a horrific brain injury. Starkly shot and troublingly played by Considine, it throws his family and the audience into new unexpected territory. What follows is by far the strongest segment of the film. An almost theatrical chamber piece between Matty and Emma. Melodramatic and heavy handed exposition is left at the door, there is no token hospital scene to capitalise the state of his condition. We can see that plainly, and in Considine’s delicately physical performance, full of gently observed tics and anguished outbursts of pain.

Unable to form coherent sentences, struggling to do even the basic of movements and riddled with memory loss, Matty’s new state is painful to watch. Only exacerbated in the vulnerability and formidable strength witnessed in Emma. Whittaker plays things to the nines, patient but heartbreakingly desperate to see glimmers of the man she once knew and loved. Considine takes his time with these scenes, content to let himself and Whittaker build instinctual performances around the story. It is a somewhat traditional narrative about overcoming adversity but the willingness to take things to some pretty dark places offsets that. Prone to physical violence (never gratuitous rather short and shocking) and bouts of confused rage, Matty pushes Emma to breaking point.

At this point some of the flaws in Considine’s storytelling come to the fore. Events gradually becoming a tad melodramatic as opposed to the grounded detail of the opening half, culminating in an hopelessly convenient epiphany that feels unearned and trite. Off the back of that though Considine gradually weans back into the tale Matty’s old boxing team, and manages to say some pertinent things about masculinity. Abandoning him after the incident, his two best buds find themselves falling back into his life. Their guilt and sadness at the cowardice they have shown is beautifully played by Paul Popplewell and Tony Pitts. A bedside scene is immensely tear-inducing.

In fact Journeyman features a bevy of truly devastating moments, and yet the emotions are earned. Outside of the melodramatic plot point mentioned above, Considine never overplays things, no swelling music or OTT warbling here. There is an argument to be made that the film is all emotion, lacking the intelligence and fire of Tyrannosaur, but it is hard to deny the strength of its feelings and the earnestness of those portraying them. It is most definitely a punishing experience, with levity a little too absent when a few well timed bouts of humour relief wouldn’t have gone amiss. At 92 mins Journeyman just about finds the right time to quit. His direction continues to be confident, unshowy and driven by performance, you can certainly see that this is an actor turned director. Visually there is little remarkable about it, it would be nice to see what he can do with a more distinctive visual palate, but when the performer is front and centre the use of excessive screen techniques would feel unwarranted. Journeyman proves though that Considine’s debut wasn’t a one off, and while not as good as that incendiary outing, it offers hope that his career will be one to watch. Mind you those expecting an out and out boxing film may think otherwise!