Synopsis: In the bleak perpetually freezing Wyoming hills, expert tracker Cory Lambert (Renner) discovers the frozen body of an 18yr old Native American girl. When it is revealed that the young victim was raped, FBI officer Jane Banner (Olsen) is sent in to investigate. Pairing up with Cory, they soon face threats against their lives as the duo battle to solve the case. 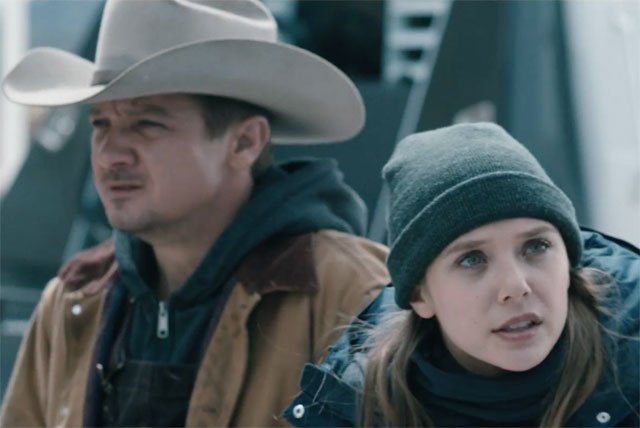 Despite only having 3 films to his writing name, Taylor Sheridan has showcased a particular fondness for certain plot beats. His stories tend to focus on dedicated focused professionals (usually in law enforcement), dollops of dry dark humour, protagonists that stray the line between good and bad, lashings of brutal efficient violence, and combining them against a harsh unforgiving environment. Sicario had the fierce unpredictable world of Mexican drug cartels, Hell or High Water within the economically stricken and sparse plains of Texas, and now here in his directorial debut (which he has also written) we are trapped in the bleak chilly environs of Wyoming. Once again Sheridan taps into the dark underbelly of American life, eking out a gripping emotionally wrought tale despite the obvious limitations of his newbie director status.

Wind River certainly has some stark striking shots though. None more so than its opening scenes. Pitch black, save for the distant haze of the shining moonlight, a young woman treks through the thick snow. No sound can be heard, no person within in sight, all we hear is the melancholy overtures of a poem she has written. It is clear she has been hurt, it is clear she is running from someone, it is clear she won’t survive. It is a powerful immediate opening, Sheridan selling the harshness of this setting in a few brief moments. The victim turns out to be a local Native American girl, known to the local wild animal tracker Cory (Renner), whom finds her frozen bloodied body whilst out on a hunt. A quiet but focused man, Cory has lived in these neck of the woods for years, but is weighed down by a terrible loss suffered just a few years back.

Sheridan hints at this strife subtly, spending time with Cory before the body is found. His interactions with his ex loaded with unspoken bitterness and a relationship with his young son fraught with tension due to Cory’s guilt and love for spending time in the wilderness with nothing but his sadness for company. Oddly Sheridan resists delving into these relationships further, Cory’s wife and son getting thrown to the wayside when the detective plot kicks in. Fortunately Jeremy Renner delivers a formidable quietly devastating performance. Always working best when playing tightly wound individuals and yet here Sheridan is savvy enough to resist any moments of OTT melodramatic outbursts which usually accompany his roles. Renner plays it very much all in the eyes. Close to tears a number of times but driven to concentrate on finding the girls tormentors using it as a sort of redemptive springboard for his own pain. It might well be one of his best performances.

Equally as strong though, in a cast of uniformally brilliant performances, is Elizabeth Olsen as the FBI agent sworn in to judge whether this is a homicide case or not. Although it is clear that the victim was raped before her death, the fact she stumbled for miles before freezing to death (or as the film graphically describes it her lungs literally exploded from the cold) means it cannot be treated as straight murder. Simply meaning that she is all on her own. A relative newbie to these sort of cases, Olsen portrays this naivety with a barely contained vulnerability, overcome with tearful sadness in the toughest moments, but displaying an inner core of strength when needed. The two of them make for a strong partnership, albeit one built on respect and professionalism rather than any shoehorned in romance.

Around them Sheridan continues his fine work in sketching out believably authentic characters, such as the laconic chief of police played by Graham Greene. Weathered by the weather (sorry) and his lack of resources, he is delightfully sardonic, adroitly realistic about the scum he has to deal with and the challenges of policing such a bleak environment. Likewise Gil Birmingham, so very good in Hell or High Water, does huge amounts with very little screentime. As the father of the victim, he is a pragmatic noble presence. Witnessing his wife collapse under grief (a scene which is shocking in its matter of fact simplicity), and remaining rigid, until a fraught encounter with Renner releases a torrent of devastating emotional catharsis. Their two scenes together are laced with potent mourning and profound words of comfort.

Sheridan is nothing if not a fierce wordsmith. His script graced with a shrewd dark wit and a philosophical edge. There are issues with his portrayal of the villains of the piece, coming across a lot more one-dimensional than his usual multi-faceted work. Also it has to be said the mystery itself resolves quite listlessly. Steadily building tension, and hinting at something grander as the stakes rise, but ultimately revealing itself to be the result of nothing more than a troubled night and the pressures of being stuck in this cold setting. Sheridan is clever with the reveal, cutting away to a flashback when you least expect it, and in some respects there is more believability in the outcome of the mystery being so familiar. You just can’t help wondering if sometimes Sheridan was concentrating on mood and theme rather than venturing deeper into plot mechanics. Wind River is most definitely his strongest work emotionally, Sicario and Hell or High Water kept their feelings at a cool distance, here they are bubbling so close to the surface that no amount of snow can keep it frozen for long.

As a directorial debut it is a capable strong first start. There is a distinct lack of originality at times, but he knows how to frame a strong image, and constructs a couple of tense filled action scenes. They are not quite on the level of the Roger Deakins sculpted ferocity that Sicario delivered, but let’s face it very little is. Sheridan does make some wise choices in people to surround him, especially in bringing in the aural majesty of Nick Cave and Warren Ellis to score. Full of mournful choral chants and soulful strings, it does a lot to absorb you within the chilly tragedy. You just feel at times that a more seasoned director will have honed Wind River into something that sticks deeper in the brain. A number of scenes lack a sense of urgency or characterful distinction especially the earlier glimpses of Cory and his son. But these are minor sticking points in a thriller that gradually captivates resulting in a powerful final line which turns Wind River into an unexpected political statement regarding the Native American’s place in society. Even though its pertinent points around an under-represented minority carry slightly less weight due to Sheridan never truly concentrating on their point of view throughout. One thing you will most definitely take away from Wind River is that the cold hills of Wyoming are not for the faint of heart, and Taylor Sheridan is a terrific voice in American cinema.