Synopsis: A renowned writer (Bardem) has holed himself up in his childhood home, one that his adoring wife (Lawrence) spends her waking hours fixing up after a catastrophic fire. When two unannounced guests show up (Harris and Michelle Pfeiffer) tensions between husband and wife reach a breaking point. Then things get really insane. 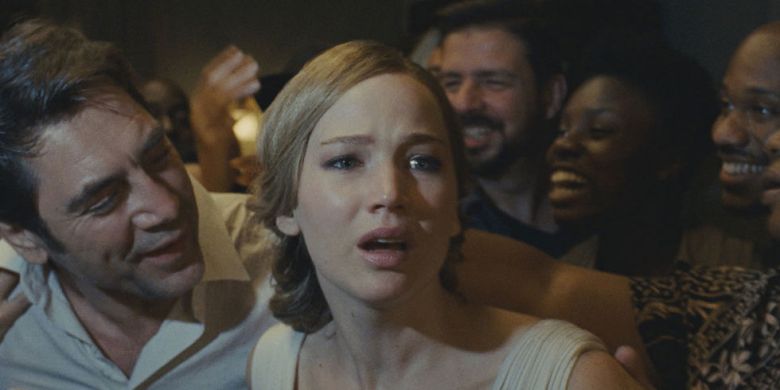 After a viewing of mother!, Darren Aronofsky’s new uncategorisable film, there is no doubt that every member of the audience will face a visceral immediate reaction. Whereas some films inspire gentle shrugs, warm applause or “that was brilliant” exclamations, mother! (yes this is how it must be written) leaves you in such a state of shock at what you have just experienced that you feel it is necessary to exclaim something, anything to ease the anxiety. It is both a good and a bad feeling, you know that you’ve seen something, just that you’re not entirely sure what that something is!

However let us start at the beginning. mother! opens with a woman surrounded in flames, skin flailing apart and an expression on her face that is a mixture of fear, surprise and in some respects relief. Before we can process such an image Aronofsky’s camera zooms us away and into an old rustic estate in an unspecified location. Here in this bleak obtuse setting resides Jennifer Lawrence’s Mother and Javier Bardem’s Him, the lack of character names already cluing us into the surrealist world mother! rests within. She spends her days making over the house after a fire apparently decimated the place, whilst he desperately tries to follow up on a hugely lauded piece of literary work. There is an immediate foreboding nature to these introductory scenes. Aronofsky forgoing a traditional score in favour of some truly magnificent sound design. Every facet of this house creaks and moves in such a way that it is quite possible it has a life of its own. A fact that is unfortunately hit home by some spectacularly on the nose imagery Aronofsky utilises throughout.

On the surface it appears these two are blissfully in love, but on closer inspection it is clear something is not quite right. She is extreme in her adoration, desperate for his focus to steer towards their relationship rather than the creative drive that pulls him away. He is too crippled by his creative blindness though to notice all this, his frustrations close to boiling point at the lack of ink to his paper. Not to mention a strange fixation with a bejewelled orb in his study. Into this isolated existence comes two unexpected visitors. Husband and wife (or as the cast list calls them Man and Woman) played by Ed Harris and Michelle Pfeiffer. He arrives first, claiming he has mistaken their abode for a charming B&B, and Bardem’s Him being all too welcoming. Harris is terrific here, hinting at a potential darkness beneath the good natured facade. Before a later film event gives him avenues to mine realms of potent sadness. Mother remains sceptical about his arrival though, but all her attempts at raising Him’s awareness fall flat. He seems to absorb the attentions of Man, feeding off the stories he tells, perhaps in an effort to inspire some writing.

Pfeiffer’s appearance truly shakes though. Largely absent from the screen in recent years, here she reminds us of the charged sensuality she bought to the iconic roles of Catwoman or Susie Diamond. Sexually voracious, questioning and unpredictable, she offsets Mother to breaking point. To say more about where things go from here would not only rob you of experiencing the madness for yourself but also I’m not entirely sure I could adequately explain it to you if I tried. Suffice to say all the hints, allusions and tensions explode into a final act of such garish mayhem that you feel utterly blindsided. In a remarkable coup on studio Paramount’s part the marketing for mother! has pitched it as more of a flat out horror film. There are certainly horrific moments to be witnessed but this is so much else.

The inherent problem with the “so much else” is there is just so much of it! Aronofsky has always thrived in metaphor, but mother! is pretty much ALL metaphor. Each scene is dripping in symbolic mystery that you’re driven to discover what it all means. The consequence of this is that he forgets to actually tell a story. From a narrative perspective very little happens here, or at least things happen but only in surface of representing something deeper. I’m all for metaphor in my film watching but it is just exhausting after Aronofsky seemingly tackles every issue under the sun. To wit mother! takes in the fear of becoming a parent, relationship dynamics, the anxieties of creative fulfilment, celebrity culture, religious fundamentalism, environmental destruction amongst many many others. It has the air of a film student desperately trying to prove his work actually “means” something. Many aspects do work very well. Aronofsky continues his exploration of the creative self, and his incendiary takedown of celebrity culture is formidable stuff. But these would’ve been much tighter and far more effective when allowed to breathe naturally.

One thing that cannot be judged badly though is Lawrence’s performance. She handles some truly dark material with utter conviction. Largely wordless, Aronofsky centres nigh on 60% of his film purely at her face and she rewards such focus with palpably expressive reactions. There is confusion, pain, love, grace and so much more throughout her journey, and Lawrence has never been better. Javier Bardem matches her with a performance of equal complexity. His character remains more mysterious than her, veering from villain to affectionate lover sometimes within a single scene. Bardem’s captivating unusual facial features combined with his eloquently odd accent make him an eminently watchable figure. It’s doubly impressive when you take into account just how much Aronofsky is asking them to convey.

Speaking of Aronofsky his talent behind the camera is clear as always. Shots drip with unease, the house framed in claustrophobia and horror movie tropes. As mentioned his use of sound is award worthy work. Especially in the final act which becomes a gothic outlandish piece of garish chaos. The soundscapes becoming oppressive, brutalising and exhausting. mother! has much to adore, much to appreciate and in a world of franchises needs to be applauded for tackling challenging material executed in a manner few could dream up. But it is hard to truly enjoy anything going on. There is just too damn much symbolism. In moments it makes you feel clever and enriched that you can see what mother! is referencing only to lose you again mere seconds later when another metaphor hones into view. I’m all for a film making me do some work, but before too long it feels akin to a chore. Straight afterwards me and my beautiful whip-smart girlfriend (PSA: mother! is an awkward as hell date movie) found ourselves having to Google search in order to delve into halve of what the film was saying. Now there is nothing wrong with that in the least, a sign of a good film is one that inspires you to read into it further. But the fact that every search conjured up another theory and another unseen metaphor only inspired further frustration. mother! is certainly going to be on many a film scholars syllabus come the new year, but it doesn’t always justify itself as being anything other than a study piece.

Verdict: Confounding, brazenly audacious, acted with ferocity and laced with beautifully pertinent observations on society. mother! lets itself down by trying to say far too much, becoming exhaustingly challenging, especially in its baroque final act.