Synopsis: After being let go from his job West Virginia family man Jimmy Logan (Tatum) decides to steal from his former employers. Enlisting the help of his one armed brother (Driver) and sister Mellie (Riley Keough), they come up with a plan involving eccentric explosive expert Joe Bang (Craig) and a prison break out. Complications arise when a mix-up forces the crew to pull off the heist during a popular NASCAR race. 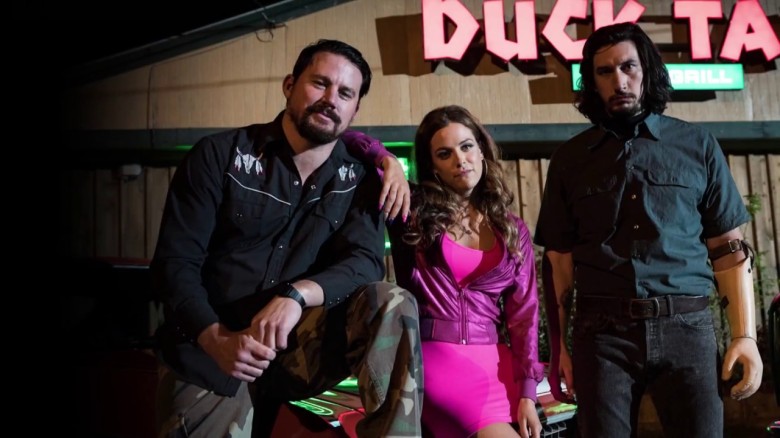 It felt a little shameful that the general audience did not make more of a fuss when director Steven Soderbergh announced he was retiring from feature filmmaking back in 2013. Frustrated with the crippling limitations the Hollywood studio system consistently placed on him and his own production company he decided a step away was necessary. Never quite championed as much as he should’ve been for his innate skill at jumping from genre to genre, nailing each with supreme confidence and bringing together actorly ensembles that would leave most directors riddled with jealousy. A sojourn into TV paid dividends (if you haven’t checked out his graphic and evocative show The Knick then you are missing one of the best prestige shows available), but it is no surprise that the lure of the big screen would eventually pull him back.

Logan Lucky feels very much, however, like a director just tentatively finding his cinematic feet again, repeating as it does aspects from his previous flicks, notably the glossy Ocean’s movies. But, thanks to a winning script by Rebecca Blunt, Logan is very much an Ocean film spliced with a Coen Brothers farce. This is most keenly felt in the characters that populate this Virginian set tall tale. Led from the front by Tatum’s Jimmy Logan, a blue collar worker unexpectedly laid off due to an undeclared medical issue (a chance to comment on the uncaring American employment bureaucracy goes unused by a more lighthearted Soderbergh, no Traffic politicising here) and facing a challenge for custody over his young daughter against Katie Holmes’s bitter ex. Seeing a way out of his economic plight, an area Soderbergh avoids really delving into meaning it is harder to sympathise with Jimmy’s struggles, by formulating a heist against his former employers; a construction firm working on a local NASCAR track circuit. A surprisingly unpredictable performer, Tatum really has come a long way since Step Up’s hunky simplicity, he gives Jimmy a Coen-esque droll manner masking a keen focus and lofty imagination. The brief snippets of him with his daughter are affectionate and relaxed enough to give a heartfelt boost to his criminal plans.

Helping in his schemes is scatty but capable little sister Mellie (Riley Keough, not really stretching herself here with an underwritten role) and older brother Clyde played by a deliciously deadpan Adam Driver.  Left with one arm after a war injury and tending bar at his local, he slurs his way through scenes with a detached acerbic drollness but one riddled with sly intelligence. Similar to the Coens protagonists, what seems moronic on the surface belies deeper smarts and strengths. Clyde’s loyalty and care for his brother is plain to see, giving their relationship added heart. Plus Driver is responsible for some of the funniest moments in a film that doesn’t always end up as humorous as it thinks it is, one reaction he has to losing his arm in a large vacuum left me in stitches.

Better than all of these is Daniel Craig’s Joe Bang. An explosives expert whom the brothers decide to break out of prison, in a scene of playful anarchy, and a man who revels in the surreal hilarity of what they are undertaking. Craig has become a somewhat sullen actor lately, his Bond brilliant but specific, whereas we’ve forgotten how unpredictable and flat out fun he can be as a performer. His southern drawl, high pitched camp voice and relaxed attitude providing the film with most of its high level energy.

It is lucky Soderbergh has these talented individuals in his corner because, while he keeps things briskly moving and the tone light, there is very little stretching him here. Hitting the expected beats he had so brilliantly established himself with Ocean’s Eleven back in 2001. Blunt’s script taking the well oiled tack of never quite showing you the whole plan before a final reveal ties the whole plot together. This worked wonders in the Ocean’s films (well 11 and 13, let’s forget about 12 shall we?) with their far fetched outcomes giving the audience a “how did they do that” thrill. Logan Lucky plays things in a considerably lower key, refreshing but undermining the necessity of making things so hidden to begin with. Soderbergh and Blunt also fail to keep a handle on some of the more outlandish characters. A cocky British NASCAR driver feels hopelessly out of place and utterly surplus to the plots requirements, becomes even more egregious when you see he is played by a hammy Seth MacFarlane (complete with hideous British accent). Likewise Hilary Swank arrives late in the game as an FBI agent hot on the trail of the thieves, in a storyline that Soderbergh seems so uninterested in it barely takes up 15 mins of the generous running time, and with a performance that bemuses with its odd voice pitch. In another strange move Katherine Waterston appears for all of 2 scenes in what is a staggering waste of her talents .

Issues are prevalent in the script too. Never reaching the zany heights it so strives for. The comedy being mild rather than laugh inducing, outside of a few moments. Characters are also frustratingly out of reach, performances doing much of the work to bring out some dimensions. At just shy of 2 hrs it also feels a little pulled thin, where a shorter run time would have given it a tight focus. Still it is hard to deny that even a slight Soderbergh film is still worth a watch, him gracing the film with enough spirit, excitement and fun to offset the limitations of its familiarity. All in all it is just nice to see him return to calling the shots, and if Logan Lucky represents a director just testing the waters before leaping back into the true depths then you can do worse than this slice of Friday Night escapism.

Verdict: Light on its feet, with some great performances, Logan Lucky offers little in the way of surprises but its controlled eccentric energy provides ample fun for a Friday night.