Synopsis: Henry (Lieberher) is an 11yr old genius wunderkind who balances school life with being the man of the house. His mother Susan (Watts) tries hard to take care of Henry and his younger brother Peter (Tremblay) but struggles with her emotional immaturity and her own self-doubts. Things take an unexpected turn when she discovers Henry has conjured up a wild plan to save the girl next door whom he believes is being abused. 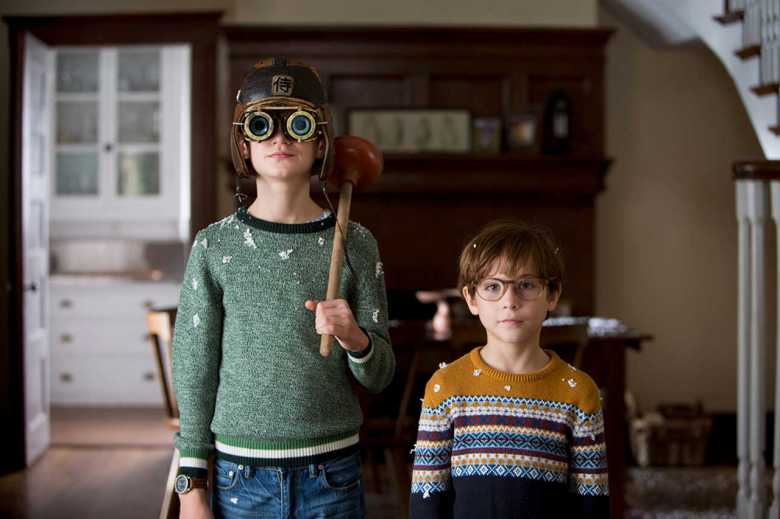 I’m not entirely sure what director Colin Trevorrow thinks is going to happen to his career after he moves from this small drama to the large scale epic of Star Wars Episode 9. Whether he thinks he’ll never be able to make an intimate heavy themed film again instead stuck within the confines of franchise filmmaking, as The Book of Henry attempts to cram in every possible theme going, and the film suffers because of it. We have child abuse, grief, parental responsibility, Naomi Watts with a sniper rifle and so much more. In fact my intention was to write this review without the need for spoilers but in order to truly grasp this not entirely unsuccessful film I’m going to have to be a bit more graphic, so from here on out SPOILER ALERT.

The Book of Henry is very much a film of three distinct parts. The first, and easily the strongest, centres on how this off kilter family makes their way through life. At the middle is 11 yr old Henry, superbly gifted and intelligent way beyond his years (this must be the year for films about genius kids with Gifted only being released mere weeks ago) but forcing himself into a normal school so as to better blend in with his peers. For Henry there is an immense responsibility placed on his shoulders as his mother Susan is an emotionally immature maelstrom, keen to play video games and get drunk with pal Sheila (Sarah Silverman at her endearingly volatile best). Watts is effective here, selling her crippling doubts over not only being a single mother but also a mother to a truly gifted child. She graces the kids with the sort of affection only a mother can bring but continually questions whether she is capable. Her frequent emotional outbursts, particularly in the moving second act, are palpable, and the overall dynamic between her and Henry is refreshingly different.

We also have the third cog Peter. Jacob Tremblay is as adorable as ever but delivers some captivating emotional maturity in the films bigger tear-inducing moments. However he is sadly underused as the third act turns into whatever the hell it turns into. The kinship between the two brothers is warmly conveyed, full of little moments between them that seals their bond. Trevorrow films all this with an earthy winsome naturalism, all autumnal leaves and low key interactions. Darkness is hinted at, notably the quite clearly abused young girl Henry has a protective instinct for. This is an aspect that if played too heavy handed could’ve weakened the power but Trevorrow is supremely subtle here. Using Maddie Ziegler’s largely wordless performance and some restrained photography to convey real trauma. Although Dean Norris is sadly giving little dimensions to play as her abusive stepfather.

Just when you think this is the angle the film will play for its remaining running time, Henry plotting to save Christina himself, the second act veers into the realms of tragedy. It appears Henry’s frequent headaches are indicative of a brain tumour, one which is rapidly destroying his genius mind. All this devastation is played well, and with dignity. But it very much whiplashes you from out of nowhere, Trevorrow falling fast into weepie melodrama with barely a wink before we are thrust into the severe tonal shift of the final act. Mind you we get the welcome arrival of a grizzly gentle Lee Pace as the doctor in charge of Henry, whom is sadly underused even as the film awkwardly suggests a romantic angle.

Now we arrive at the most egregious part of The Book of Henry. Grief stricken at her loss, and completely lost without his guidance, Susan clings to an idea he had in order to deal with it. It’s not the most ridiculous of filmic conventions and I understand Trevorrow’s intentions but said idea is so far fetched that it undermines any good will we may have had towards the film. The idea of people looking to hope, to family, to each other is a noble respectable one but is delivered in such an oddly amalgamated way within the whole film that you try hard to stifle the guffaws.

In all due respect to Trevorrow, who has been cruelly subjected to vitriolic reviews, The Book of Henry is no disaster. It is keenly paced, effectively acted, handsomely shot and edited with clarity. The script, one area his Jurassic World majorly fell down on, is decent enough, and Michael Giacchino provides a solid if unmemorable score. He is also helped immeasurably from Lieberher’s sterling performance. Mature beyond his years, loquaciously witty and able to make his intellect precociously lovable rather than insufferable. We can also never truly besmirch something that at least attempts something unique and original. It’s just a shame that the film can never get a grip on its identity, driving through genres with all the eloquence of a drunk monkey at the wheel of an Alfa Romeo.

Verdict: The Book of Henry is unable to reconcile its tonal eccentricities and misjudged final act with the solid craftsmanship on display.