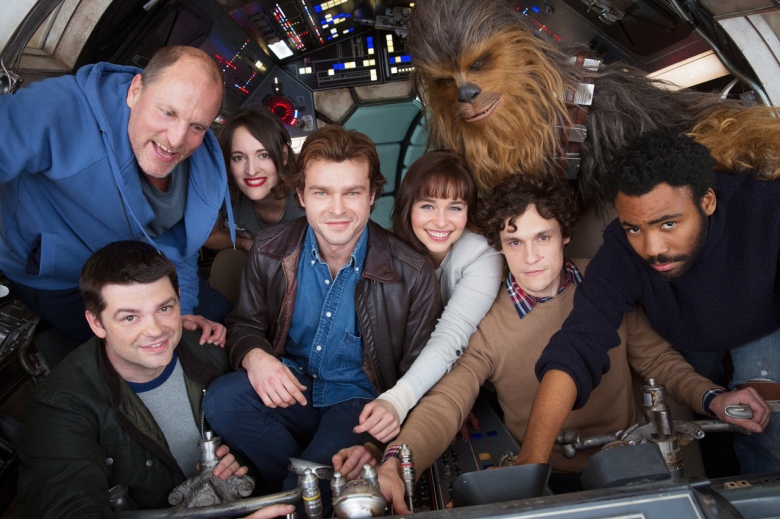 Well this was unexpected! Just under a week ago word broke that the second Star Wars anthology film, currently without a title but rumoured to be Solo: A Star Wars Story, had lost its two young directors Phil Lord and Christopher Miller. Shocking not just because they seemed a perfect fit for the wiseacre energetic character (just watch their two Jump Street films to see their firm grasp of character and comedy) but also because the film is 5 months into production with only a few weeks left to go.

Unfortunately, our vision and process weren’t aligned with our partners on this project. We normally aren’t fans of the phrase ‘creative differences’ but for once this cliché is true. We are really proud of the amazing and world-class work of our cast and crew,” Phil Lord and Christopher Miller

“Phil Lord and Christopher Miller are talented filmmakers who have assembled an incredible cast and crew, but it’s become clear that we had different creative visions on this film, and we’ve decided to part ways. A new director will be announced soon,” Kathy Kennedy
Soon after it was revealed that this wasn’t a simple parting of the ways but an actual firing. Hollywood Reporter stating that Lucasfilm had become unhappy with the direction the film had been taken, in fact they had had issues with it from the start. Brought in for their comedic sensibilities they may have been but it appears that the film was veering too heavily into comedy. Miller and Lord are known for their loose improvisational style, favouring multiple takes and script changes on the hoof. This unfortunately differed too dramatically from the more stringent tightly focused vision Lucasfilm had.

As the days have gone on more and more info has leaked, but one must always take these sorts of things with a pinch of salt. Big stories such as these tend to inspire carefully managed damage control, half-truths and flat out lies, so take all this with a healthy caution. Entertainment Weekly has reported in more vicious detail, describing how the “significant improvisation” from the script was angering father/son screenwriters Lawrence and Joe Kasdan, to the point where they were demanding Kennedy intervene. Hopes were pinned on the upcoming reshoots, similar to Rogue One, in which the film could be retconned into the vision the studio originally had. However due to the lack of coverage (different versions of the same scene from multiple angles to help give more options in the edit) Miller and Lord shot meant that the film could not be altered as much as anticipated. It certainly did not help that the duo were unwilling to “compromise on what they saw as the best for the film” with the relationship between the directors and the studio turning from “strained to fractured.”

Word has also emerged of numerous changes behind the scenes. This fascinating article over at THR goes into more, potentially gossipy detail, regarding the replacement of editors midway through the shoot. As well as the lack of “decisive direction” from the duo. A notable part mentions that it was actually lead star Alden Ehrenreich who brought these notable issues to the attention of Lucasfilm, worried that the comedic aspect was just too much. Even to the point where an acting coach was sought out in order to evolve Ehrenreich into a stronger comedic performer (anyone who has seen Hail Caesar! would know that the young man is more than capable of being funny). It all sounds utterly chaotic.

Soon after it was announced that Ron Howard would be taking over as director, with production re-commencing July 10th. Keen not to upset the boat Howard has been in constant e-mail contact with Miller and Lord being “very supportive and elegant” in responding. In terms of Howard’s hiring I am cautious but optimistic. Although his recent output has been rather flat (Inferno was just hideous) he is capable of delivering something visually energetic (take a look at Rush for example), has a knack for coaching great performances from his casts and is willing to amend his style to suit the material. On the flipside he is a rather safe director as opposed to the unpredictable nature Lord/Miller would’ve brought to the table.

All this chaos has certainly cast a shadow over how involved Lucasfilm really is in these new Star Wars movies. Just last year Rogue One faced controversy as director Gareth Edwards found himself replaced for reshoots by Tony Gilroy, as well as the complete overhaul of the films third act. Fortunately it turned out well, Rogue One earning rave reviews and big money, but it proved that Lucasfilm is not interested in an independent eye leading these pictures. Instead they want a collaboration that hews close to their vision, with daring choices coming through committee rather than a singular voice. Even an experienced hand such as JJ Abrams faced a tug of war with the studio over a far too tight release window.

The saving grace in what could easily be troubling studio interference is the voice of Kathleen Kennedy. A truly experienced producer, responsible for almost all of Steven Spielberg’s films as well as, what must be admitted, is a successful revitalisation for Star Wars after the prequels blackened its prospects. She is a forceful (!) intelligent and savvy producer and I have trust in her instincts. Similar to Kevin Feige with Marvel, they both look outside the box when choosing their directors, and insist on collaboration. There are concerns with this process though. Young directors chosen predominately because they are cheap, confident but still wary of fighting back against the machine. Evidence of this can be seen in how more stubborn yet singular voices such as Edgar Wright and now Miller/Lord have parted ways citing those “creative differences”. Joss Whedon even spoke of the intense pressures Marvel put on him with Age of Ultron.

It is something that would cause real problems if not for the fact that the films themselves largely turn out very well.  If the right director is sourced, one who can work alongside the studio, knowing when to choose their battles and realising that franchise filmmaking can be frustrating then they will flourish. I’m not favouring one side over the other or saying that studio control will always lead down some dark paths. All I know is that I have faith and hope. After all Star Wars was built on such things.