Synopsis: Ambitious young executive Lockhart (DeHaan) is sent to retrieve his missing CEO from a health clinic in the Swiss Alps, but what he finds there is mysterious doctors, odd patients and a helluva lot of eels! 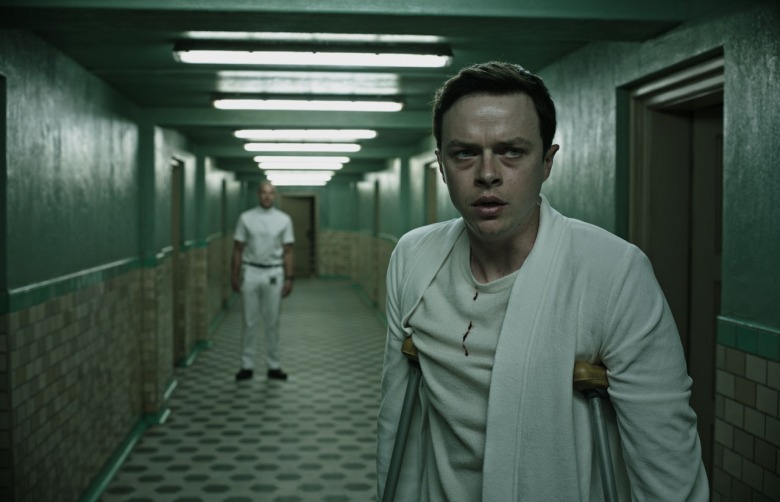 You cannot fault A Cure for Wellness for ambition. An original concept written by Justin Haythe and directed by Pirates of the Caribbean maestro Gore Verbinski in a world where original is few and far between should be cause for celebration. Unfortunately the sheer wealth of ideas strips the effect the film works so so hard to elicit.

The vibe is set from the off, with a woozy starkly shot scene of a hard working office bod keeling over at work. Having very little meaning in the overall plot it at least kicks things off on a foreboding note, one that only grows as the film progresses. A fellow upstart in the company is the snarky dickish Lockhart who is tasked with bringing back a CEO from a clinic after he pens a letter detailing some quite nonsensical ramblings. DeHaan is suitably arrogant here and thankfully develops some much needed sympathy as the tidal wave of evil-doings come down upon him. Always a jittery presence he conveys the fear of his situation with a vulnerability that gives way to an inner strength in the films’ final moments.

To begin with though DeHaan’s Lockhart is inquisitive and an incessant pain in the ass to the staff at the remote Swiss resort. Lockhart can see something is not quite right, the patients are unnervingly nice, the locals noticeably suspicious and the staff universally unhelpful. But an attempt to leave is marred by a horrifically captured car crash, the car twisting repeatedly but framed around DeHaan’s shocked face. Waking up with his leg in a brace back in the resort he faces the strange treatments issued by Issac’s crazed Austrian doctor Volmer. Issac continues the softly spoken viciousness he parlayed into Harry Potter nemesis Lucius Malfoy, but here is given the opportunity to go full on nutso in an ending of utterly Gothic madness. He is by far the best thing in it, although Mia Goth as a long term patient is an eerie unusual presence. Her interesting slightly unnerving look is captivating for both the audience and Lockhart, and she provides the unexpected soul as Issac’s malevolent plan for her comes to light.

Unfortunately that plan winds up being confusing and lost in the midst of so many other ideas at play. Visually Verbinski has crafted some the most beguiling images I’ve seen in any film, aided by some truly first rate production design. The resort is filled with Victorian style, with slight steampunk leanings. All immense steel structures and odd contraptions, it makes the shut-down of his Bioshock movie ever more upsetting. He has certainly got an eye for horrifying images too, from body horror to a troubling focus on eels that only exacerbates the ensuing dread. One scene of dentistry will most definitely result in empty dentist waiting rooms countrywide, evocative of Marathon Man’s Olivier nightmare. The problem is the style very much outweighs the substance, and when the substance is this dense all you have left is the images. It’s an impossible scenario the film finds itself in. Screenwriter Justin Haythe seems so excited to share his crazy ideas that he doesn’t know when to rein it back.

The sheer length of the thing also adds into that. Coming in at close to 3hrs and feeling like it. At numerous moments I believed the film was on its way to wrapping up before it continued for another half an hour longer. The revelations, when they finally arrive, are equal parts clever and confusing, losing their effect because of the sheer weight of story preceding it. But it is always tough to fault a film for ambition, and this film has it in spades. If you’re so inclined to let it in, as this will not appeal to everyone, it is extremely absorbing, fostering a delirious vibe that enchants as much as it bemuses. The plot turns and horror of it all is a rare thing to see within the studio system, owing more to the Korean films of Park Chan-Wook et al, and I hope Verbinski is able to continue delivering his own vision, but perhaps in future he can take the advice of “too much of a good thing” and focus as much attention on story as he does the visuals.

Verdict: Immensely ambitious and impeccably designed, A Cure for Wellness is too long and unwieldy to really linger in the memory. Although it may foster more nightmares around eels than you’d think possible!