Synopsis: Former super-assassin John Wick (Reeves) attempts to retire into civilian life once more after the violent events of the first film, but when Italian gangster Santino D’Antonio shows up to make John pay up for past favours, he must once more enter a world of blood and pain. 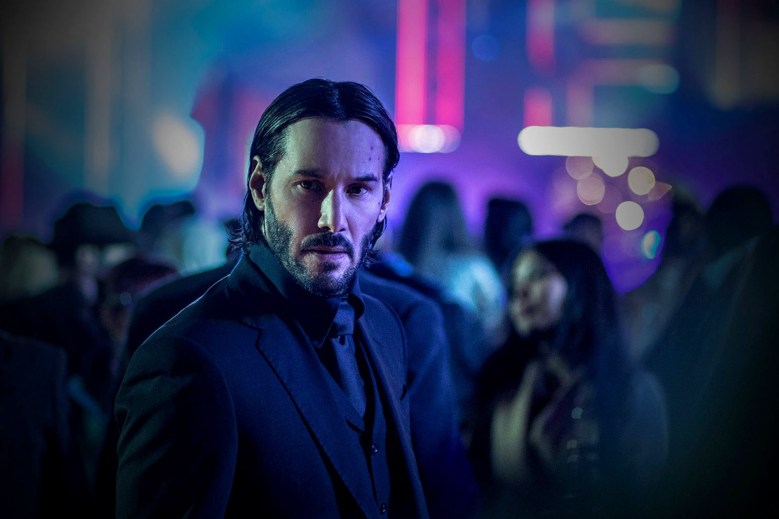 In a sea of so called ‘Geriatric’ action films, featuring the exhausted visages of Liam Neeson, Bruce Willis and even Sean Penn, John Wick was a refreshing kick to the teeth. Stylish, graceful action choreography, sly knowing humour and a unique universe of assassins lent Wick a chance to stand out from the pack. Not to mention a physically capable Reeves in the lead, his ability to perform his own stunts was a remarkable counterpoint to the increasingly poor stunt stand-ins for one Mr Neeson. A modest hit but critically lauded with a steady fanbase has now given way to the inevitable Chapter Two. Unfortunately, although it still has the force and delight in its action scenes it is a notably weaker film than that first cold glass of water to the face.

Opening only a few days after the brutal events of the first film left a wave of dead bodies across New York, we find John Wick hunting down his stolen car (a trigger point for his rampage in the first chapter). Coming upon a gang of car thieves led by a delightfully hammy Peter Stormare, what follows is a crushingly vicious fight scene primarily involving cars rather than punches. It is a bracing if unnecessary starting gambit, for a man so intent on finding his beloved car he smashes it around with gleeful abandon. Spluttering back home we have a brief calm, as he remembers his lost wife and attempts to shut away any remaining remnant of his past career, before an old assassin comrade comes a calling. Riccardo Scamarcio plays D’Antonio with a cold blandness but is suitably bastardy enough to make a decent villain, especially after blowing up Wick’s house.

You see John owes D’Antonio a debt, for it was he who helped Wick to escape the hitman life previously, and he has come to collect. Said debt will involve a trip to Rome to kill his sister, one who has reached a high status in the assassin community. Resisting only results in the previously mentioned house destruction, triggering a trip to the Continental Hotel for a little tete a tete with Ian McShane’s hitman master. The strongest aspect of the first film was definitely the world building surrounding these super-killers. An honest upfront community, with their gold coin currency and no-violence allowed hotel adding colour to what could have been pure genericness. Of course this film builds ever more on that world, centred around Lance Reddick’s blissfully cool and all knowing concierge. A mid-film dive into how kill contracts are placed via 50s dressed women, analogue messages and telegrams is a wonderfully surreal addition.

Journeying to Rome John tracks down his target, after a cheeky montage of armed preparations featuring a delightful Peter Serafinowick as a hideously polite weapons expert, and the films first major gun fight occurs. Favouring his renowned two bullet technique (one in the legs, one in the head) it is a strikingly choreographed dance but let down by a leap into underground catacombs that sadly loses any sense of geography. Arising from this Wick ends up with a price on his head, and the worlds leading killers come after him. This leads us into the second, far stronger half of the film. The first part, though captivating is a little sluggish and suffers from the lack of a simplistic visceral drive that so powered the first film.

As assassin after assassin comes after John the film conjures an almost symphonic series of fight scenes. Set all in one night it is staggeringly violent, slickly edited and driven around a balletic wounded physicality from Reeves. Once again he has a wooden charisma that is very much endearing. The fact he performs all his own stunts and can handle a weapon with suitable skill gives his performance an effective physical elegance, not to mention looking badass in a suit! His opponents are also suitably capable. Common makes for a formidable enemy, their two mano-a-mano battles are frighteningly brutal. Ruby Rose also appears as a deaf mute (just one of the films many offbeat touches) with a deadpan humour alongside the viciousness. We also get a mini Matrix reunion in the form of Laurence Fishburne’s philosophy spouting pigeon-keeping underground hitman. Although the script does not provide the same poetic depth to his flighty ramblings as that 90s classic did, in fact he is a tad annoying.

Culminating in some bruising takedowns in a hall of mirrors (a evocative stylish highpoint) Wick is left battered and broken, physically and mentally. One way these films distinguish themselves from the pack is that despite his almost indestructible nature Reeves certainly gets black and blue. No Liam Neeson style minor cuts and grazes here! In wrapping up this sophomore chapter director Stahelski ends on a cliffhanger which, tantalising and exciting it may be, can’t help feeling anti-climatic and abrupt.

Separating from director partner David Leitch, Chad Stahelski goes it alone this time out and does a solid job. The action has, barring that catacomb fight, a clear geography and sense of space with some highly imaginative new kills. The dialogue is as dialled back as ever, but the plot machinations are not always particularly original or in fact interesting. John Wick: Chapter One (as it must now be known) used simplicity to foster a greater immediacy and emotional thrust, Chapter Two suitably expands and in some clever ways, but a measure of the surprise factor is missing. John Wick is still above and beyond the OAP punch-ups but in the inevitable Chapter Three I’m hoping for a little less familiarity and a bit more unpredictability.

Verdict: A crunchingly composed melody of violence with some ingenious additions to the Wick mythology and a cast of effective performers. The weaker first half and slightly dull story unfortunately lessen the impact.