Synopsis: Ruth is heavily pregnant, and alone due to the loss of her boyfriend in a climbing accident. Rising hormones and parental anxiety start to manifest itself in odd ways as her unborn baby begins to talk to her, and subsequently urges her to begin a murderous killing spree of revenge. 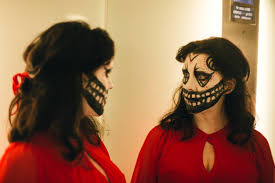 I should begin this by stating that I have a penis. Now I don’t mean to be deliberately provocative but I feel it is a pertinent point to add, being a man I’m obviously unable to truly understand what it feels like to be pregnant. Sure I can understand the physical changes involved but emotionally and mentally it is something far beyond my grasp. Director Alice Lowe, however, has found a way to really showcase the anxiety, the alienation, the isolation and the sheer weirdness that goes with having a child growing inside of you. The fact she has done all this, including writing and starring, whilst heavily pregnant is inspiring.

Adept at darkly humorous short films, Alice Lowe then cultivated that into a winningly cutting script for Ben Wheatley’s Sightseers. Her big debut behind the camera grips from the off with an unusual encounter with a reptile salesman. Low-key, quietly funny and filmed with a calm tension that slightly unnerves, you sense something bad is about to happen but you’re not entirely sure what. When the moment does come it is shocking, oddly funny and hideously gory. This is sort of the mantra for the entire film itself.

A lonely individual, Ruth (Alice Lowe in a captivatingly complex performance) then stumbles through a number of strange scenarios. Meeting her doctor (a dry funny Jo Hartley) who offers little to no comfort, a biting dig at the NHS’s sometimes cold manner towards patients, Ruth begins to hear the strange almost Gollum like voice of her unborn foetus. Urging her to kill in a delightfully childish manner, not to mention a remarkable potty mouth for a baby who doesn’t yet know the English language. It is a device that will put off some, and at times it can be a little on the nose, but as a method of understanding her mindset it is quite effective.

Oddly Ruth does not have much of an internal struggle over whether to kill, barring one rather nice gentlemen who just happens to be an unfortunate witness to another murder, instead Lowe plays it as the slow formation of a movie monster. However there is a slowly revealed reason for the victims she chooses of which I’ll try to avoid here. All I will say is the clue is in the title, and the reveal itself is subtly played. Rather than a dramatic loud revelation it is laced throughout the picture. Utilising moody flashback images and fragmented conversations with her victims, the reason behind all this violence begins to come together inside your head. When the film finally releases itself from the teasing, the outcome carries real emotional heft.

Prevenge manages to find this balance between the dramatic and the darkly humorous ( I stress the dark humour bit here) with nuance and skill. Numerous scenes bounce between the surreal comical nature of the situations she finds herself in, and the more serious ramifications on her emotional wellbeing. The film has a remarkable way of offsetting the audiences expectations, notably in the use of some quite frankly gooey scenes of extreme gore. Violence here is uncomfortable, unforgiving and visceral, if you don’t wince at a number of moments here then you have a stronger stomach than I. This need to show the blood and death in realistic fashion combines well with the honest confronting nature of the film itself.

There are flaws inherent in a newbie director’s first big screen stab, there is a certain rough around the edges nature to the camerawork (one that the director herself will openly admit) but one that gives the film a certain charm and distinction. But it cannot be denied that Alice Lowe is a remarkable talent with a eye for the surreal, the unusual and the truth in her work. As Ruth covers her face with tribal skeletal markings and stalks the streets knife in hand, and red in costume, it becomes clear she has created a new horror monster. But one who has your sympathies. She has given empowerment, strength and a voice to those whom give the gift of life to us all, but tempered with a layer of caution for everyone else. Don’t mess with the pregnant chick!

Verdict: Provocative, perceptive and undercut with a dark knowing humour. Prevenge is rough and ready, but has an emotional kicker that truly disarms. Alice Lowe has marked herself as one of British cinemas most exciting voices.