Forget the ever convoluted nature of the X-Men film franchise for a minute and prepare to see a new kind of comic-book movie. Building on the moody and evocative teaser trailer, that so wonderfully combined the mournful voice of Johnny Cash with some startlingly bleak images, this new glimpse is violent, sweary and exciting.

Hugh Jackman has spoken repeatedly that this will be his swansong performance as the titular Wolvie (although recent banter with Deadpool’s Ryan Reynolds suggests a team-up may be on the cards) and the trailer conveys that with force. Set 20yrs after the events of Days of Future Past (and I’m told this is the Wolverine from the epilogue sequence featuring Jean Grey, Beast et al, not the Logan last seen in the Apocalypse timeline, see what I mean by complicated) where no new mutants have been born in over a decade. Caring for a dementia ridden Charles Xavier, Logan is a broken man physically and mentally. He struggles to heal, note the wounds seen throughout the trailer, this would never have happened in his younger days. Into this maelstrom of depression and despair comes an unexpected surprise, a new young mutant by the name of X-23. Prone to extreme bouts of violence similar to Logan and setting out on the road to avoid the mutant hating Ravagers, and you have all the ingredients for an emotional road trip.

Immediate things to notice; blood and lots of it, a gleefully sweary Professor X (man Patrick Stewart is always a joy when cussing), and a distinctly foreboding western vibe. Director James Mangold (who also directed The Wolverine) has fully committed to delivering on the promise of a fully fledged Logan film. No doubt helped along by the huge success of last years Deadpool, but what stands out is this isn’t just violence and swears for the sake of it. It would have been all too easy to just do another bland Wolverine film, albeit with some tacked on gore and ‘fucks’, but here it all adds to the tone of the overall piece. When Charles says “I’m fucking 90”, it emphasises the exhaustion and the pain of ageing, a theme that this film seems to be laser focused on. I also love that at this point the X-Men have become legendary heroes featuring in their own comic-book (a chance to feature the original page versions).

Fox did also screen the first 40mins of the film to critics last year, and the reaction has been uniformly positive so far, with a lot of love being saved for Dafne Keen’s X-23. Indeed even in this trailer her ferocity, her vulnerability and her general coolness is evident, just look at this shot for example:

Fox are not normally the studio to take such big risks, but with Deadpool last year and now this, they seem to be turning a corner somewhat. The fact that the movie screens for critics in a couple of weeks is a sign that the suits have immense faith in their final product. Comic-book films are notoriously kept under lock and key pretty close to release day.

How this film will play with general audiences I’m unsure about. The Wolverine was a modest hit but last years Apocalypse floundered. The R-rated nature of this coupled with the sense of finality to it all, and the unique nihilistic tone of the trailers should peak enough interest to do solid business. My only concern is whether the bleakness might overwhelm the whole, but with a few dry laughs hinted at here I’m optimistic the right balance has been struck. 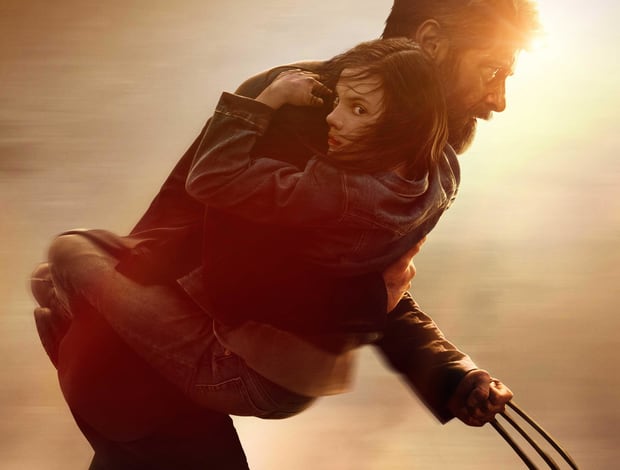 On the flipside to such an awesome trailer, we had to suffer the reveal of a new Power Rangers teaser. The blogosphere seemed to give this one a favourable review, admiring the scale of it all. I happen to feel the opposite, sure the action looks pretty solid if a little Transformers-esque, but they are taking this whole thing oh so seriously. A concept such as Power Rangers (which I loved as a kid btw) needs to be played light, with tongue firmly in cheek. The so called laughs here are strained (the moment one character claims he’s black to his black friend I’m pretty sure is not funny, it’s racist) and the story a little thin. I’m also unsure who this is aimed at, looking far too dark and violent to appeal to the kid fans, but playing up the cheesiness of it all which will not fly with the adult crowd so much. The Go Go Power Rangers titles that flag up during this trailer boost the silliness of it all, and yet everyone looks so serious!

Two savings graces lie in Elizabeth Banks, who looks to be having delicious fun as the villain of the piece, and the return of Bryan Cranston (who once featured in the original show) who plays the role of their mentor Zordon. Otherwise though I sense this one will be lost in the haze, released as it is after Logan, Kong and Beauty and the Beast.