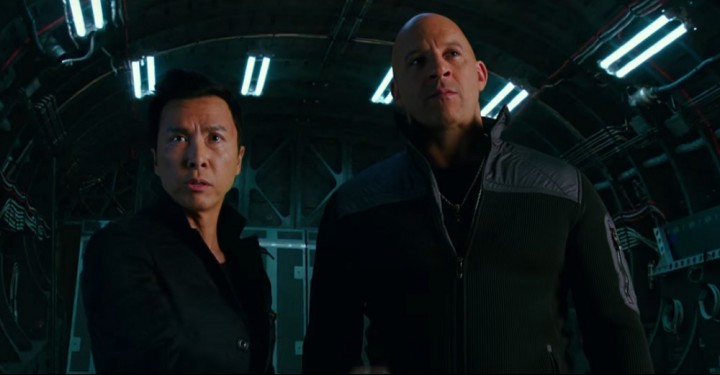 I have to thank Vin Diesel. Thank him for delivering a film of such woefully depressing awfulness that I get to write my first truly negative review. For this is a film with literally nothing going for it, so little that it has taken me a few days before I wrote this so I could at least try and think of something positive. I failed!

Coming well over 10 years after the first xXx film tapped into a growing extreme sports market and landed Vin Diesel with another big hit so soon after The Fast and the Furious began its world domination. A cheesy but exuberant piece of action entertainment, one that I have no shame in admitting that I enjoyed. Most likely due to being in my teens and finding loud noises, cool stunts and copious hot women a major draw. I still have fond memories of it but after seeing this I now question whether it still holds up or simply tapped into the ever growing hormones of a teenage horndog. As this film most certainly knows its demographic and plays to that audience with little regard for their intelligence or the older crowds brought in by Diesel’s immense popularity. Let’s also not mention the belated Diesel less sequel starring Ice Cube and swiftly being forgotten by all who saw it. Don’t worry this film finds time to bring Cube back in the odd hope that there are fans out there who care about this sort of thing.

Return of Xander Cage opens with possibly the best aspect of the first film, Samuel L Jackson, returning and proving that he alone gets what a dreadful slurge this all is. There is a knowing glint in his eye as he tries to deliver the dreadful dialogue with a measure of dignity. This scene also makes way for, what I hear, is a famous football person by the name of Neymar, for little reason than to showcase his ball kicking skills. It is a strange decision in a film rife with hundreds of them. So some explosions occur and we move forward to a meeting of the CIAs best in a room filled with ostentatious glass and serious stares at computer screens. The meeting is being chaired by director Toni Collette (staggeringly miscast and unintentionally hilarious) as she makes sweeping generic statements about the state of the nation. This meeting finds itself under attack by an elite group of EXTREME fighters led by Donnie Yen. Yen is a distinctly charismatic performer (for evidence of this just look at this months Rogue One) but in this films biggest mistake is not at all capitalised on. One late film fight showcases his immense skill as a warrior but is too little too late.

In the words of Collette finding these villains will take a hero unlike any other, yes its the sort of film where people say these sorts of things, and the hunt for xXx begins. Well not so much a hunt as a quick scene change. For a man who is apparently hard to find he is found with the barest of effort. Therein begins the Vin Diesel show. Now I like Vin Diesel, he is very much a sculpted piece of driftwood but manages to bring out a level of cheesy charisma especially in the Fast and Furious films. But in this he struggles to sell even the half decent lines, of which I counted at least 4, and clearly had a hand in a lot of the filmmaking decisions. Seemingly every scene is shot at an angle to truly magnify his body, or his superhero stance. It is quite frankly exhausting. It was as if it was written by a kidnapped teenager handcuffed and made to write out as many scenes of people staring at Diesel in adoration, whilst Vin masturbates in the background. Its a sickening tribute to himself. Every, and I mean, everybody in this film has at least one moment to comment on Xander’s coolness, or hotness or just flat out fuck him. I kid you not one scene features Cage meeting up with a group of hot nubile hackers who of course all drape themselves over Diesel in lustful abandon. It’s like Caligula, if Caligula lived with his mum and had never spoken to an actual female apart from when his mother brings him clean underwear and pizza.

The whole thing is seemingly never-ending, lurching from one EXTREME encounter to another. It certainly doesn’t help that the filmmakers, a loose term I hesitate to use here, decide to forego in camera stuntwork in favour of some of the worst CGI this side of Die Another Day (in which this film trumps with an even worse use of water based action). Its all too frequent that these cheesy action films can never marry the big action notions they have with actual realistic expectations of the limitations of their budgets. Save the aforementioned Donnie Yen fight scene and the brief insanity of Vin Diesel flying through a plummeting plane (a moment I genuinely smiled at in a good way), it is repeatedly a barrage of loud noises and hastily assembled visual effects. It is sort of apt that the ringmaster of all this juvenile ridiculousness happens to be named D.J, as anything less would go against the carefully constructed ineptitude the film fosters. The only thing this hopelessly bad film has taught me is that in a year where even the most terrible films are more a result of studio interference than anything else, it is still possible to make a truly awful film from its very core. He may have returned but I would rather have had Xander Cage stay where he was hidden!!

Verdict: Truly inept filmmaking coupled with the worst dialogue this side of a British soap opera and a Vin Diesel performance that is pretty much an egotistical self-blowjob. Your first 2017 turkey has been found.