Synopsis: An enslaved preacher Nat Turner (Parker) is shuttled from ranch to ranch by his drunken master Samuel (Hammer) to qualm fellow slaves and make them more obedient to their masters. Witnessing the horrors of slavery upon his kin Nat decides to take matters into his own hands, leading a rebellion that will change everything. Based on a true story. 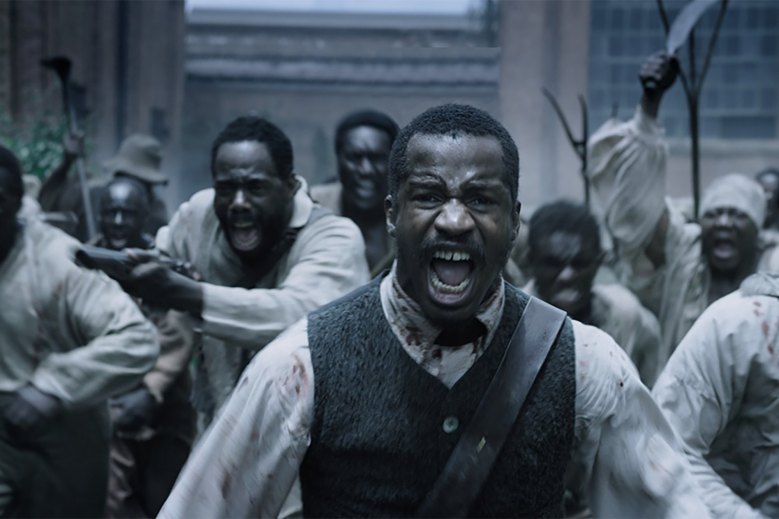 It is strange to think that just under a year ago The Birth of a Nation, Nate Parker’s writing and directing debut, earned rapturous applause out of the Sundance Film Festival. In turn leading to the largest amount ever shelled out by a film studio (Fox Searchlight in this case) to distribute the film ($17 million). It had all the pedigree of a potential Oscar winner, strong critical reviews, a potent true story and a young director about to become Hollywood’s next big thing. Unfortunately Nate Parker’s reputation suffered an immeasurable blow due to a past indiscretion. Acquitted he may have been, and far be it from me (a lowly film blogger) to get involved in the debate surrounding it all, the film was bound to suffer. Released Stateside and here in the U.K to muted opinion, it steadily dropped off people’s radar and its chances of Oscar success have all but diminished. The fact remains though that despite the adoration leaped on it at Sundance and the subsequent controversy surrounding its creator, this film would never have been in the running. It is far too flawed to make a true impression.

Opening with a bold and starkly lit shot of wailing worshippers, we meet a young Nat Turner. Told by the preacher in charge that he is destined for great things due to an odd birthmark on his chest that coincidentally fits in with a local prophecy, it is clear Nate Parker is framing Turner as almost a deity, sent down to restore order to a troubled world. The young Nat lives on a familiar Southern plantation, and he and his family are treated with some level of care by their masters led by Penelope Ann Miller’s Elizabeth. After his father narrowly avoids being shot and subsequently flees, Nat is thrust into the care of Elizabeth when she learns he can read English and therefore the hallowed Bible. Right from the off it is clear that Nat is of the silent type, comfortable to listen and observe rather than participate. This attitude continues as we find him as an adult picking cotton in a series of handsomely framed shots. However, in being so passive and quiet Nat becomes a hard protagonist to empathise with. Although similar to the non-verbal performance given by Chiwetel Ejiofor in 12 Years a Slave, Nate Parker is not of the same calibre as Ejiofor. Whereas he sold us with his wonderfully expressive eyes and palpable seething rage, Parker cannot quite sell it to the same depths. He is certainly a decent performer and in the later scenes of sorrow and rousing speeches Parker’s raw honesty shines through. But it all feels a little hollow.

Parker is not aided by a hit and miss script. Penning himself it is suitably authentic and has moments of real stirring grace, but is also a touch on the flat side. Almost every character says the exact lines you’d expect, offering an almost dull predictability to the text. It doesn’t help that some of the exchanges are so potently earnest that they come off a little cheap. The strong actors help though. Hammer is a bit of a one-dimensional drunk, covering similar ground to the conflicted nature of being a master that Cumberbatch showcased in 12 Years a Slave, but he performs it admirably. Gabrielle Union gives a powerfully touching performance as Nat’s wife. In fact it is in their scenes that the script breaks from expectations and becomes almost playful, offering what is possibly the closest we’ve ever come to rom-com material in a slavery drama. The balance it strikes is spot on and leavens the heavy nature of the scenes to come. Other surrounding actors give heartfelt, earthly performances, helping to give the film the weight that the script otherwise fails to always convey.

It is in his direction that the most can be said. Parker conjures up some beautiful images, full of natural light and elemental forces. He does have a tendency to frame certain dialogue scenes in an odd way, sometimes blocking off the actor doing the talking or having the camera in an unusual position. Whether this is a conscious decision or not I do not know but I would certainly place it down to his inexperience behind the camera. Luckily they are few and far between, as for the most part he has a confidence and a clear eye. Foregoing manipulative music he stages some potent sequences, including the final large scale battle scene mud-clogged in brutal violence and emotional sacrifice. He should be commended for also being relatively sparse with the gruelling imagery. 12 Years a Slave, although a masterpiece, could sometimes feel like it revelled in the brutality of the violence imposed on the slaves. Birth of a Nation has a number of hard to watch moments, most notably a force feeding scene of genuine chair-squirming horror, but keeps them at arms length and focuses more on the reactions of the witnesses than the acts themselves.

Sadly this willingness to spend less time on the victims ordeal than on the audiences perspective has led to uncomfortable accusations around a central rape scene within the film. Framed as it is on the men who deal with the aftermath and their anguish at the events, reducing the woman who suffered said abuse to almost a footnote, has caused more vocal critics of the film to decry it as a male centric revenge piece (the event in question does lead to the revolutionary call to arms in the final third) that belittles the real victims in these situations. This is half true, and I for one am not going to denigrate the emotional and physical suffering these poor women faced, but throughout this film has been from the male viewpoint. As much as women play a big part, no scene is really shown from a woman’s POV, it is a story of the men at the centre, the de-masculinity they face at the hands of their oppressors. If the film had suddenly changed tack and followed said rape victims perspective it would have felt unnatural to the rest of the piece, and taken away the potency of what this moment does to galvanise Nat and his brothers.

Nat’s evolution into the sacrificial warrior we see at the end is certainly rousing, and Parker conveys his slide into despair effectively (one scene of him delivering a sermon whilst barely containing his rage is hugely emotional), but it never truly moves you. In an attempt to suddenly make things on a grander scale for the final blood soaked events the intimacy of the earlier scenes is lost. Whereas 12 years a Slave found its scale in the breadth of one mans personal journey, The Birth of a Nation loses sight of the man we are supposed to be rooting for. We may have spent two hours with him but come the inevitable final moments you never really feel like you know him, thus robbing the film of the power it so strives for. It turns out paying $17million only gets you a moderate return on your investment.

Verdict: Though its rough around the edges quality gives the film a raw power at times, too often the earnestness of its message and the subdued nature of its leading hero robs the film of true emotional heft.