Synopsis: In the 1940s the king in waiting of Botswana Prince Seretse (Oyelowo) meets and falls in love with Ruth (Pike), a white typist, whilst being educated in London. Shocking the world when they elope, causing friction between his people, her family and a UK government yearning to build strong ties with Botswana’s neighbour, South Africa. 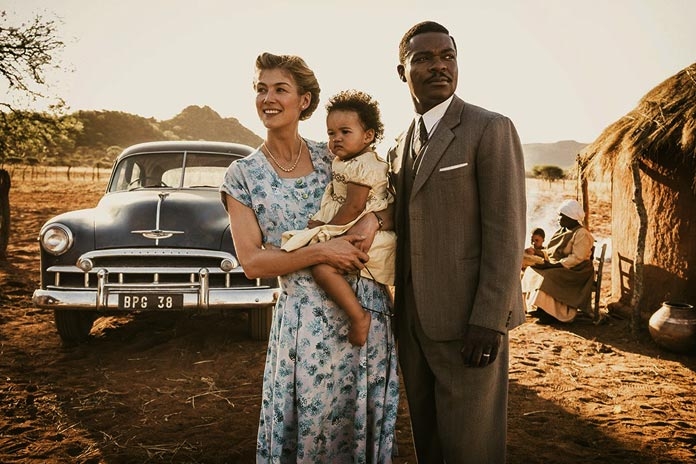 ‘Based on a True Story’ Five words that give even the most carefree Oscar voter a raging hard-on. General audiences though can be a lot more finicky. Overplay the triumphant messages and exaggerate the true circumstances too much then you risk people noticing the rampant manipulation. Or let the events play out as exactly as happened and it can become all too evident that the true events aren’t quite thrilling enough to sustain a 2hr runtime. Occasionally if you have a strong and confident director either option can work, take Fincher’s Zodiac for the detail or The Imitation Game’s exaggeration for effective dramatic power. A United Kingdom falls into an altogether different category. It is very much accurate to the actual events and also accentuates events for dramatic effect but director Amma Asante undercooks both sides with rather flat direction.

Opening in a London bathed in perpetual misty moonlight, we see the beginnings of a wonderfully sketched romance between Seretse and Ruth. Rooted in their fierce intelligence and love of dancing, there are at least 3 dance hall scenes in about 5mins, it is full of longing looks and gentle swooning. Both leads sell what the script fails to portray. The race issue never raises its head for either of them, it is simply a case of two shining souls who find each other. The kicker, sadly, is that Seretse is poised to be king of his home country, and bringing home a white queen will likely cause just a little bit of controversy.

The film wastes no time in erupting us into the central battle, that of the impending rise of Apartheid in South Africa and the UK governments uncomfortable ignorance of it in order to maintain a strong relationship with the Gold bearing South. All this is represented in Jack Davenport’s slimy political stooge, in which his usual schtick of stubborn smarmy bastards veers severely into cliche, and Tom Felton’s British consulate. He plays at a similar key to Davenport, with just a little bit of Draco Malfoy sneer. They make fine boo-worthy villains, albeit maybe a tad two-dimensional.

As the pressure mounts from all sides for the couple to split, the movie makes a bold decision to put the two of them in different countries for a long period of time. He in London to beg Parliament to recognise his kingship and marriage, her back in Africa battling against the consternation’s of both the white and black communities. It is a strong section but suffers from having the two of them so far apart, their chemistry being the first acts highpoint. Thankfully they both deliver exceptional performances to power it through. Oyelowo gives a dignified quietly emotional performance, his eyes a deep pool of vulnerability and expressiveness. Pike is arguably even better. Her character goes through a journey of such pain and strife but she is always resilient. At times her facade quivers into a state of barely contained tears, only to use it to further strengthen her inner fortitude. There is a natural easiness between the two of them, he made stronger through her faith and belief in him, and her through his unwavering commitment to her despite the odds.

If all this sounds just a little bit worthy and po-faced it is. The story by its very nature is full of crowd-pleasing highs and tear inducing lows. Asante directs it all with restraint, her craft is impeccable with the location work being a particular standout (there is no tourism worthy scene setter, its all a part of the characters journey) but you do find yourself wishing for some more fire in its belly. The flames are there in the performances, Oyelowo’s speech to his people is rich with rousing honesty. Except the incessant movie of the week score and almost monotone nature to the film prevents it entering into your mind. Don’t get me wrong the film is stirring, captivating and emotional, however it is probably more down to the story itself rather than any real technique the film employs. You could argue Asante does this by design, relying on her powerful story and cast to do the heavy lifting, but I found myself forgetting a lot about it come the bus ride home.

Verdict: Decent craft, sterling performances and a rousing plea for tolerance against the backdrop of political turmoil make for an effectively absorbing true story. Though the extreme worthiness and lack of directorial fireworks lessen the impact.