Synopsis: After fighting in WWI Tom (Fassbender) takes up a solitary position as a lighthouse keeper off the coast of Australia, with only his wife Isabel (Vikander) for company. Desperate for a child, they suffer a series of miscarriages. But when a baby washes ashore it could be the answer to their prayers. As the years pass they wind up running into the baby’s biological mother (Weisz) and a lot of emotional wroughtness occurs. 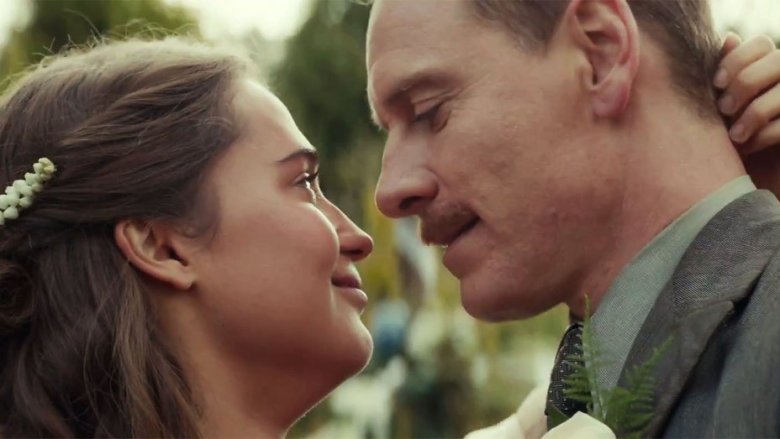 The Light between Oceans is very much a film of two distinct halves. Similar to director Cianfrance’s The Place Beyond the Pines, with its 3 separate time periods. This time however the distinction lies not in its story but in the effectiveness of the film itself. The first half is brilliant. Tom (an on form stoic Fassbender) is suffering the pang of guilt and sorrow of surviving the brutality of WW1, whilst others lost their lives. Seeking out a job as a lighthouse keeper on a small island off the coast of Australia, he sees this as a chance to hide from the world and lose himself within his pain. Before he leaves he meets a young woman called Isabel (another emotionally wrenching role for new big thing Vikander) whom awakens something within. Their courtship is wonderfully sketched, the chemistry that resulted in them becoming a real life couple is palpable, and shot with a lyrical beauty by cinematographer Adam Arkapaw. It is all very stately and restrained but it still manages to warm the heart.

As time passes on the island the two of them attempt to conceive a child. Falling pregnant with her first child leads into a gut-wrenching and powerfully staged miscarriage. Although Cianfrance lays it all on a little thick by framing it within a forceful storm, filled with lashings of rain and loud thunderclaps. Yes it’s that sort of film. Scenes of the couple dealing with the aftermath are potent and subtly delivered. Inevitably a second miscarriage follows and is more effectively horrifying thanks to the simplicity of its delivery. Afternoon tea and piano playing segueing into blood and anguish. It is hugely moving.

The melodrama continues when into this maelstrom of pain and suffering comes a screaming baby washing up on the shores in a boat, the body of her father lying beside her. This is when the aforementioned second half makes itself evident. Deciding to keep the baby as their own, against Tom’s protestations, his willingness to go ahead with Isabel’s morally wrong plan speaks to the power of his love for her. Years go by and the young charge grows into possibly one of the cutest child performers seen on screen. One scene of Lucy eating potatoes is so sweet I almost went into a diabetic coma. Then the twist hits. Lucy is in fact the daughter of Rachel Weisz’s Hannah. As the two leads put two and two together they must then face a battle with the authorities and a vengeful Hannah.

By this point the incessant swelling score from Alexandre Desplat (usually a reliable source of music magic) begins to irritate rather than stir. Cianfrance needs to learn the art of sparseness, numerous emotionally wrought scenes lose their poignancy when the score insists on telling you how to feel. It isn’t just the score though. The final third is a series of repetitive moments of tears, sadness and quite frankly unrealistic decisions. One in particular by Weisz makes no sense whatsoever and feels very much like it was designed simply to wring even more emotion out of the audience.

And there lies the problem with the second half. Whereas the first is classical, restrained and effective at establishing these characters. The second attempts to continue being restrained whilst hitting you again and again with utterly melodramatic soap opera-esque moments. It elicits tears of course, how can it not with a story like this, but nowhere near as many as it thinks it does.

The performers cannot be blamed. Fassbender is terrific. Full of repressed pain, he is a quiet powerful presence. The final moments belong to him, and although storywise it is truly ridiculous, his tear stained eyes will undoubtedly move you. Vikander continues to impress, capturing the numbness and pain of losing a baby with truth and rawness. Weisz likewise is effective but suffers from only being introduced midway through the film meaning your sympathies by default lie with the leads we’ve been so closely following up to this point. In reality we should be on Hannah’s side, after all it is her who’s lost her baby to another, but you can’t help but see her as the bad guy coming between this grief-stricken couple.

Sadly even they struggle to turn the increasingly sentimental events of the latter half into moments of believable heartache. Coming across more as emotional ciphers merely delivering wearisome monologues of suffering. It all sounds like I’m hating on Oceans big time, but as mentioned the first half is stirringly beautiful stuff. I would’ve been more than happy to just watch a 90min romance of a broken man learning to love again, rather than an hour of that proceeded by unbelievable soap opera contrivances. The handsome cinematography and potent performances should be celebrated, even in the weaker second half. It gives off a far too noticeable award worthy sheen, but ironically this hampers the award worthy work of its cast.

Verdict: Beautiful to look at and filled with sterling performances, particularly Fassbender, The Light between Oceans loses its power as it attempts to wring as much emotional heartache as possible.