It started earlier this week with the final poster, a delicious mix of the old school Star Wars classical posters with its painterly depictions of the cast and the lighter colour of the distinctive water planet featured in the film: 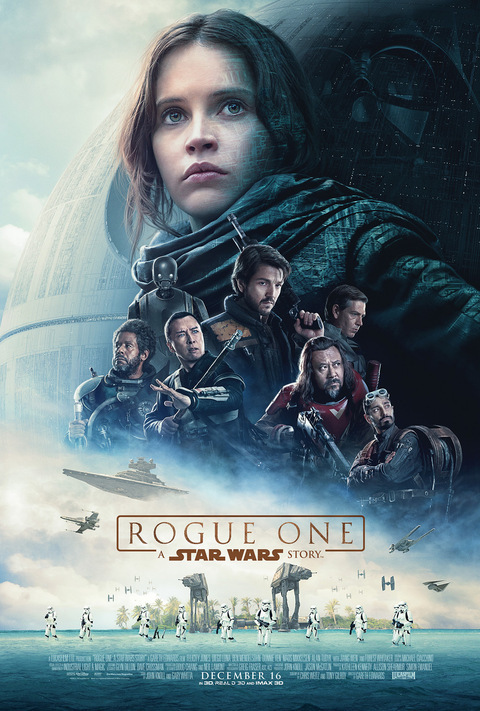 Then yesterday saw the arrival of the final trailer. Showcasing a lot more of the main plot than the previous imagery driven teasers, we start to get a picture of central hero Jyn Erso’s (Felicity Jones) motivations. It appears her father (Mads Mikkelsen, his second blockbuster this winter) is instrumental in building the Death Star. Then we have what looks to be an almost Magnificent Seven/Dirty Dozen situation involving getting a team together. In this instance there are echoes of A New Hope within, with its mismatched band of heroes fighting against an overwhelming enemy.

Speaking of that enemy, Rogue One conveys the huge power of the Empire. This is a world we’ve not witnessed on screen yet, but has numerous mention of in the originals. Epitomised in the return of the legend that is Darth Vader. Storming into the room in a brief scene in the trailer the film is obviously attempting to capture that fear and power not seen since Empire Strikes Back. Not to mention his presence alone will generate even more buzz around the film.

Forget all the reshoots and rumoured troubles behind the scenes, the visuals alone here look to be worth the price of admission. Earthy, epic and beautiful to look at. I’d argue that the visuals glimpsed so far are better than any of the other saga films have managed.

Gareth Edwards has struggled in the past to marry stunning visuals with well developed characters and a vital story. So far the cast look to be bringing interesting aspects to the group dynamic, and the central story is simple but rife with potential. I will be front and centre for this (Rogue) One!

Just look at some of those images, that buried statue alone is chill inducing. Notice the small spacecraft flying over, brilliant use of scale!!