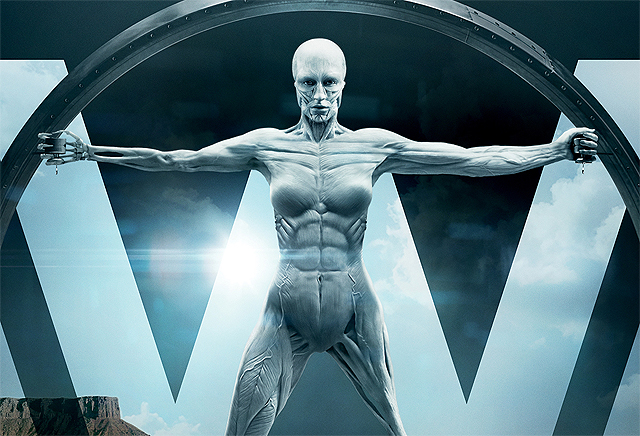 It’s going to be rare for me to write up regular TV reviews as with so much to get through and so little time I have to pick and choose what to write about, but I so enjoyed the Westworld premiere I had to write something about it.

There is a lot riding on this mega-budgeted TV saga adapted from Michael Crichton’s 1973 film (contrary to what some critics are saying it was never a novel). HBO need something to fill the void that the wildly successful Game of Thrones will leave in two years time when it wraps up (not forgetting the inevitable spin-off shows) and their attempts so far, the Scorsese produced Vinyl for example, have floundered. So they’ve looked to the dynamic pairing of producer extraordinaire JJ Abrams and writer/creator Jonathan (brother to Chris) Nolan. Minutes into this first epic episode the money spent is pretty evident, with large scale practical sets coupled with seamless visual effects, not to mention the starry cast. In fact so intent is HBO on its success that when Nolan and crew expressed concerns that the final few episodes weren’t coming together well, they shut down production to give them the time to hash the story out satisfactorily, at great expense.

For all that money spent though is the show actually any good?  I’m pleased to say, on just the pilot alone, hell yes. Opening with a confidence not seen since Thrones’s debut 6 years ago, Westworld has all the hallmarks of a future classic. A show with JJ’s name attached means that mysteries are to be expected and this is no exception, but contrary to what a number of other critics are saying the premiere episode is not weighed down by them, in fact many of the answers already lie in plain sight.

Westworld tells of a immense theme park designed to look like your typical Western, that most romantic of settings, where people can pay extensive amounts of money to live, kill, fuck and become part of whatever fantasy they so wish. Helpfully the park is predominately populated by androids, each programmed to take part in elaborate interconnected stories dreamt up by the parks’ resident ‘scriptwriter’ in which the guests or ‘newcomers’ can take part in. To avoid any issues, these machines are wiped daily and commence the same day again and again in a sort of A.I Groundhog Day, albeit with effective tweaks to their story. The pilot brilliantly sets this up with a terrific prologue, as we follow one ‘host’ played with stoic cheeriness by James Marsden. Upon entering the town he comes across his true love, Dolores, played by Evan Rachel Wood (luminous, multi-faceted and wonderful). Dolores just so happens to be another android, and as we watch this fake romance play out you immediately feel a little uncomfortable, knowing as you do that to them this feels truly real but in reality it is nothing more than orchestrated background filler. Into this scenario steps Ed Harris as the Man in Black, a role originally played by Yul Bryner in the 70s film. Although in that movie he was the malfunctioning robot, here Harris plays him as one of the guests who has seemingly been in Westworld for years. Brutally violent and an utter monster Harris is entrancing to watch, that ever present glint in his eyes giving him a warm geniality even when indulging in ghastly acts.

As this story plays out and we see more of how this audacious theme park works, Nolan (who directs as well as scripts here) brilliantly intercuts with those behind the making of the park. Here we find a plethora of great performances and a few more mysteries. Jeffrey Wright brings his ever present dulcet tones and quiet grace to his role of the chief scientist. The joy he expresses when an android showcases a new skill belies the subtle darkness underneath, you sense that this is a man who sees his fellow man as nothing but test subjects into how he can further progress these remarkable artificial beings. Anthony Hopkins is magnetic a presence as ever in the role of the creator of all this wonder. In what could turn out to be a pretty cliched role of a wizened eccentric Dr Frankenstein figure, Hopkins at least gives hints of a troubled soul underneath flashes of which come out in the exchanges he has with his creations (add that to the list of mysteries). A few of the other players do reverberate around cliche also, from the militaristic head of security (the third Hemsworth brother, Luke) and the bureaucratic company woman. Although Simon Quarterman’s Lee Sizemore is an energetic unique character, portraying the parks resident scriptwriter as a sort of mad director determined to see his lines delivered by the machines.

The cast are ably supported by the sterling production work. The previously mentioned set work is impeccably crafted and authentic, from the classical feel of the familiar western setting to the stylish but hollow design of the control room. Although action lite, a late in the episode shoot-out is superbly staged and sound tracked by a uniquely haunting version of Rolling Stone’s Paint it Black, one of a number of clever music choices from Thrones composer Ramin Djwadi.

The script work, although clunky at times, is also full of witty moments and thoughtful musings on humanity, technology and society’s sinful nature. It poses serious moral questions but never feels weighed down with delusions of grandeur or pretentiousness. I’m not saying it’s a laugh riot, and in fact I hope it does make room for some playfulness as it goes on, but the darkness never gets overbearing. These are still early days, and time will tell if the material is dense enough to warrant the supposedly 5 seasons Nolan has mapped out, but based on this evidence we have nothing to be concerned about. Nolan and team have certainly carved something of real depth, insight and inventiveness, here culminating in a breathtakingly tantalising hint of what’s to come (seriously the final shot made me gasp). Based on the pilot I’d say HBO have nothing to worry about, the future of TV is bright, albeit according to the show less so for the human race.