Synopsis: After a fungal infection causes people to turn into zombies and decimates humanity, a young girl in a military institute finds herself the key to a potential cure. 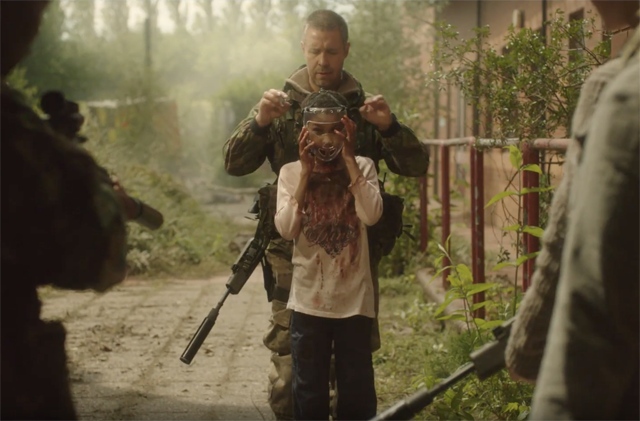 The Zombie genre has gotten a little, well, zombielike. Slow to move (I’m looking at you Walking Dead), lifeless characters (TWD again) and repetitive. Thanks to that aforementioned TV show, zombies have become far too prevalent and thus their effectiveness has weakened. Praise be then, to this UK based slice of horror. Adapted from the successful novel by Mike Carey, whom also scripts, and directed by Colm McCarthy, known mainly for brilliant BBC productions such as the recent Peaky Blinders, Girl with all the Gifts feels different from other zombie flicks mainly because they aren’t technically zombies. Taking a page from the hugely popular and exceptional video game The Last of Us, this epidemic is in fact a fungal virus that turns its victims into so called ‘Hungries’. Tempted by the scent of human secretions, they move quick, feast quick and in some cases have begun to morph into the environment itself. Similar to the game it is a captivating and believable concept, this particular infection actually does exist in nature, and is utilised to offer a complex analysis into what it means to be human or in fact what may be the next step in evolution.

Opening with a young girl counting slowly over the studio logos, we are thrown headfirst into Melanie’s (Nenua) plight. Awoken from her bed, she ties herself to a wheelchair as army personnel swarm in, guns raised, to take her to morning lessons. It is a chilling start, the use of music and sound is almost deafening, making us as uncomfortable as possible in order to throw you off balance. One of many clever filmmaking tricks McCarthy uses to hook the audience in. We are then introduced to the other key players in this nightmare dystopia. Paddy Considine’s brutish Sergeant Parks, rigid and forceful to begin with, he slowly reveals hidden layers culminating in a moving final scene. Glenn Close’s scientist Dr Caldwell, the closest this film has to a human villain. Close, though, weighs her down with exhausted nuance, she wants nothing more than to save the human race but in doing so may lose that which makes her human to begin with. Finally we have the wondrous Gemma Arterton, she gives a quiet emotional performance as Mrs Justineau, a teacher within the army complex who forms a motherly bond with young Melanie. What gives this relationship added intricacy is that although she does love the titular Girl, she has a deep rooted sadness that Melanie chose her to begin with, in turn having to face off against her fellow man whom treat Melanie with utter disgust. It is a warm, and wonderful performance.

The real plaudits, however, must go to newcomer Sennia Nenua as Melanie. It is a phenomenal masterclass. She is on camera the entire time, the whole film is shot from her PoV, another way the movie distinguishes itself, and never puts a foot wrong. Feral and monstrous one moment, then passive and polite within minutes. She is thoroughly gripping to watch, delivering little nuances and surprisingly some measure of humour. If we don’t see more from Nenua after this then I’d be incredibly shocked.

The stellar work by the cast is beat for beat matched by the sterling effort behind the scenes. We have the hauntingly sombre choral score. The incredibly detailed production design, similar to Last of Us in that nature has taken back control. Buildings smothered in creeping vines, and once well populated cities reduced to quiet husks, every sound potentially the sign of trouble. But it is the effective writer and director duo that shines. Carey finds the heart in the characters and laces heavy exposition into it with delicate care. Films like this tend to open with dense narration, bombarding you with info at the detriment of subtle world building. Here we rely on Melanie to ask the questions, and she does so but because of a deep longing to understand her existence not just as a mouthpiece for the writer to explain to the audience what is going on. It more than makes up for the somewhat thin plot, which rolls through a series of set-pieces as opposed to forward story momentum. Director McCarthy gives weight to these words with a film of immense craft and confidence. Showing a knack for tension lading action and enthralling character moments. There are some truly impressive shots for a seemingly low budget piece, notably frequent glimpses of London overrun by nature and monsters. This should provide the boost he needs to find himself launched from BBC dramas to Hollywood, and I for one look forward to what he does next.

Culminating in an ending of incredibly complex moral uncertainty, with Melanie making a decision that will likely leave audiences questioning whether she really is a sympathetic protagonist to begin with. Gifts asks whether we as a species are capable of accepting our fate and willing to let evolution take its course. However don’t let the possibility of big ideas and challenging material put you off, Gifts is still a thrilling genre exercise. Gory, fierce and utterly engrossing. The Walking Dead could learn a thing or two from this gifted Girl.

Verdict:  A light plot is offset by detailed character work delivered by a sterling cast. Nenua is an enthralling lead who provides the soul needed to counteract the violent and bloody set-pieces. The best zombie film since 28 Days Later. This Girl is certainly Gifted!