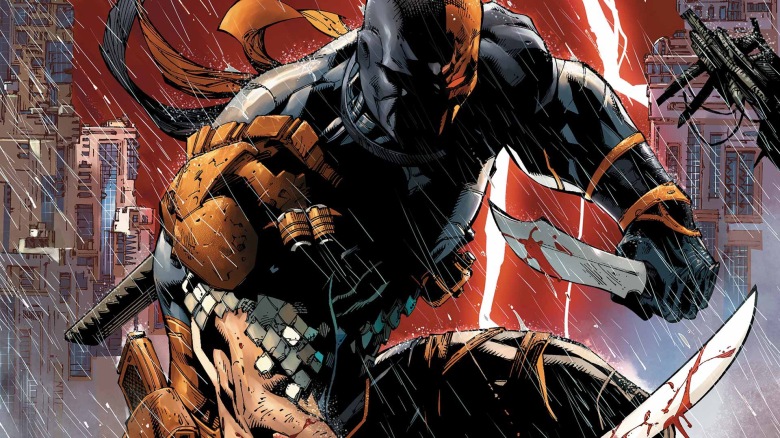 After a beautiful holiday spent seeing one of my best mates marry his wonderful bride in a spectacular locale, it’s back to reality and a catch up on some movie reveals.

The main revelation came quite unexpectedly. Ben Affleck took to Twitter a few days back, and with no context, dropped a brief vid of comic character Deathstroke. Seen leaving a military plane, it is ominous, cool and a little baffling. Check it out:

https://twitter.com/benaffleck/status/770259217940746245
Currently filming Justice League, one assumes the character will be introduced within that film. Most likely as a supporting villain, maybe for a brief introductory scene for the Batman. However soon after the vid dropped Heroic Hollywood dropped a scoop that Deathstroke will appear as the main threat in Affleck’s standalone Batman picture.

It’s a believable notion but endemic of the way WB have ran the DC movie universe so far. A random video dropped with no warning or context. Like their films so far it’s cool in the moment but afterwards you feel just a little bit confused! Marvel tend to build up to their big reveals, get the buzz going and then release.

Yet I am still excited at the prospect of Deathstroke fighting the Bat. He has always been one of the Dark Knight’s cooler villains. The best Bat bad guys tend to represent a warped mirrored similarity to aspects of Bruce Wayne’s id, Deathstroke doesn’t have that. But what he does have is more gadgets than the Caped Crusader, a darker more brutal temperament (in line with Affleck’s gritty portrayal) and the ability to be one step ahead of the Batman. To me that sounds like an exciting prospect.

No word on who may be playing the famed assassin yet but let’s start the betting now. I’m angling for Stephen Lang!!